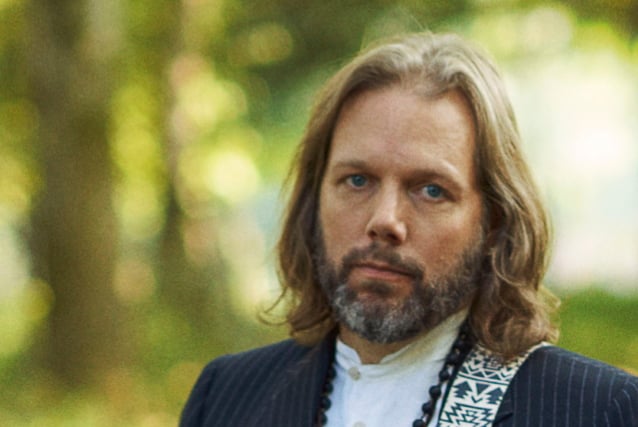 THE BLACK CROWES guitarist Rich Robinson spoke to Australia's The Rockpit about his reunion with his brother Chris for a tour to celebrate the 30th anniversary of the band's classic debut album, 1990's "Shake Your Money Maker". Joining Chris and Rich in the new BLACK CROWES lineup are returning bassist Sven Pipien, who played with the band live from 1997 up until the band's hiatus in 2015, along with Brian Griffin on drums, Joel Robinow on keyboards and Isaiah Mitchell on guitar.

Asked if he and Chris gave any consideration to the idea of bringing some of the other members of the classic THE BLACK CROWES lineup for the current tour, Rich said (as transcribed by BLABBERMOUTH.NET): "No. We have Sven, and Sven's been with us for 25 years. I met Sven when I was 14; he was in a rival Atlanta band. And Chris and Steve [Gorman, drums] lived with Sven when Chris first moved out, when he was 18 or whatever. So Sven's been in our life for longer than Johnny Colt [bass] was, or even Steve for that matter. But he didn't join till later… And Sven's great.

"Chris and I decided… A family dynamic is difficult enough as it is, and a band becomes a second family," he explained. "Some dynamics are really good and some dynamics can be really toxic. And with Steve in particular, but also Marc Ford [guitar] going back to his old ways, so to speak… which was the reason why I just put an end to [THE] MAGPIE [SALUTE, Rich's project with Marc], because I'm, like, 'Look, I'm not doing this again,' with going down that road. And then Steve, with his… He's always been that way — manipulative and really trying to keep Chris and I apart. One time Steve told me the scariest thing to him was when Chris and I worked together and got along, and his quote was, 'Because no one can stop you guys from what you wanted to do if you were together.' And he just flat out said that one day. I'm, like, 'Wow. That's really kind of a weird thing to say. Why would you…?'

"We can account for ourselves and how Chris and I deal with each other and deal with our own triggers as brothers, but we can't account for other people with negative agendas that bring their negativity to us," Rich added. "And so if we got everyone back, it would be just a money grab and it would be just, like, 'Let's do this for one record and go away,' because it would [inevitably] just fall apart because of everyone with their little petty bullshit."

Rich added that the decision to bring in mostly new members was influenced in part by his and Chris's plans to create fresh BLACK CROWES music, saying: "The reason we didn't bring anyone back like that was because we want this to be something greater than that. We wanna do this right. I mean, not only do we wanna be in each other's lives as brothers and we don't wanna go down that negative road and we don't wanna fall apart and do all this shit, but we also love playing this music together and we love writing together and we love being in a band together. And we're good at it. I mean, this is what we do. We've been doing this for 32 years, off and on, with each other and with our other bands. So this is something that we really wanted to do. We wanted to do it right and the best way to do that right is to start with a clean slate and get in and start doing it and then hence writing these songs and going in the studio.

"I've sent Chris 30 [new] songs to date to work on," he revealed. "He's singing amazing. Lyrically and melodically, it's really cool. And we're honing all the stuff in. We're working with [producer] George Drakoulias again. And we're hoping to go into the studio in February."

Regarding what the new BLACK CROWES music sounds like, Rich said: "I can't write specifically for something; I just write. I feel like if I was to try to write something, it would be insincere and I don't think that it would translate or come across. So I never filter myself and I never push myself in any direction. So I just write music. And whatever moves me is what I go with. And so that's ultimately what I do. So I've got 40 songs to date. We've kind of pulled back nine of them that maybe would work in a different scenario, like an acoustic record or whatever it may be. So I just write all the time. Chris writes all the time. This is how we do it. And then at the end of the day, you put all the cards on the table and it's gonna show itself in what the best record's gonna be."

Gorman, who penned 2019's memoir "Hard To Handle: The Life And Death Of The Black Crowes", is notably excluded from THE BLACK CROWES' current reunion, which launched a lengthy U.S. tour late year.

In August 2021, Rich told the Los Angeles Times that he had no reaction to the release of Gorman's memoir. "It didn't really affect me or make me sad," he said. "No one really takes Steve that seriously. He was our drummer for a long time, and a long time ago, he was our friend. But he was also the one who kind of schemed the most and was more willing to allow a division between me and Chris."