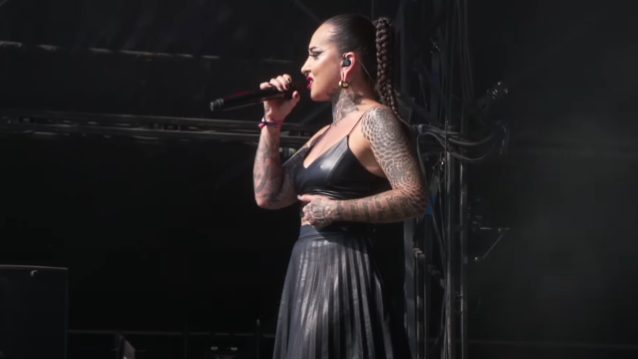 Bassist Eugene Abdukhanov and frontwoman Tatiana Shmayluk of Ukrainian modern metallers JINJER were interviewed by Oran O'Beirne of Bloodstock TV at this year's Bloodstock Open Air festival in August. Asked if the war in Ukraine has served as powerful surge of cathartic inspiration for any of their new music, Tatiana said (as transcribed by BLABBERMOUTH.NET): "Not really. I don't know why. Honestly, I've written some war songs way before JINJER, first of all, and way before war even started in Ukraine. And I don't know how, but it's easy for me to write about war when it's not happening around me. But when it started, I was absolutely devastated and paralyzed creatively. I cannot write about that. I still cannot process that. I think it's such a great trauma that it takes years and years to process, not only for me but mostly for the citizens of Ukraine, for the victims. I really think that it's not my time to write another war song right now."

But Eugene clarified: "Actually, we've never had war songs. We've never written anything which is militaristic or anything like that… We have a number of songs in our discography which are peacemaking songs, songs which call for peace, and calling them war songs can be a bit misleading because it may just make people think differently of what they really are, to be honest.

"Tatiana says that, well, she hasn't written any lyrics but we have written a number of compositions musically in these circumstances since the war started. So definitely there is a creative reflection of the events already," he revealed.

JINJER recently announced that with the support of the Ukrainian Ministry Of Culture, they were granted a special exemption to exit Ukraine in order to help their countrymen the best way they can — through music — and since hit the road on their just-wrapped European tour.

Seven months ago, JINJER released new merchandise designs to help raise funds to support their country. By April, the effort had resulted in more than $150,000 being raised, with proceeds set to be distributed directly to charity organizations of JINJER's choosing.