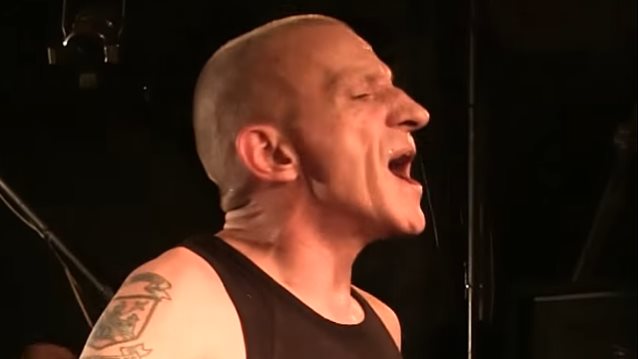 THE BUSINESS Frontman MICKY FITZ Dies After Battle With Cancer

Singer Michael "Micky Fitz" Fitzsimmons of THE BUSINESS has died after a battle with cancer.

No official statement has been released by the rest of the band, but condolences are pouring in from the punk, hardcore and oi! communities around the world.

At the end of 2015, Fitz was diagnosed with cancer on the lymph gland and had been undergoing radiotherapy.

South London's skinhead heroes THE BUSINESS have been a driving force in the scene for more than three decades. During this time, they produced countless anthems for their beloved "working class," ranging from terrace style sing-alongs to astute social commentaries.

Since forming in 1979, the band has releases more records than even some of the most long-standing punk bands, toured all over the world, released records on labels such as Epitaph, Taang!, BYO, TKO, Captain Oi! and many more, as well as having Lars Frederiksen (RANCID) produce one of their records and having shared a split release with DROPKICK MURPHYS.

THE BUSINESS's song "England 5 - Germany 1" became a football anthem for England and has appeared in the movie "Euro Trip". They even dedicated an entire album to football-related songs, titled "Hardcore Hooligan".

Back in 2013, an interviewer asked Fitz if the working-class issues, as he saw them, were the same after three and a half decades. "Some of them are the same," replied the frontman. "People out of work...is an old problem, but it's relevant now. Computers have put people out of work. There's so much work that can be done on the computer now that used to take ten people now.

"I'm actually a technophile, I love technology, have to have the next new phone. I love cinema and TiVo, but I am not a social networker because I think it's taken away personal touches, and privacy. I'd rather use the telephone."

Our deepest condolences to the family of one of our heroes and a lifetime friend, RIP Micky Fitz ... Loud, Proud, &...

No more swinging hammers, no more blowing bubbles! A legend leaves us!

R.I.P. Micky Fitz. You were a true friend and a legend. You will be missed. #thebusiness #oi #maradona #harrymay #mickyfitz #legend.

Today we learned of the passing of a friend, a legendary singer and songwriter Micky Fitz of The Business. We ask that...