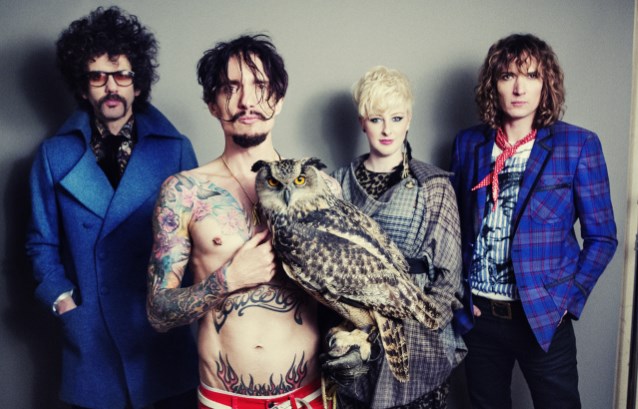 THE DARKNESS: 'Last Of Our Kind' Album Due In June; 'Barbarian' Video Released

"Barbarian", the new video from British rockers THE DARKNESS, can be seen below. The song is taken from the band's fourth album, "Last Of Our Kind", which will be released on June 1 in partnership with Kobalt Label Services. The CD was penned in Ireland and was produced by THE DARKNESS guitarist Dan Hawkins.

THE DARKNESS frontman Justin Hawkins says that "Barbarian" contains "not one but two dramatic monologues, a guitar solo that has been declared 'irresponsible,' a riff that weakens lady knees and a chorus that makes grown men shit directly into their pants." Justin goes on to point out that "The lyrics describe the Viking invasion of East Anglia which culminated in the decapitation of Edmund the Martyr. So, yeah, classic DARKNESS."

The follow-up to 2012's "Hot Cakes" was recorded at Leeders Farm Studio in Norfolk, owned by Dan Hawkins.

"The new album is brutal," Justin Hawkins told Classic Rock. "It's definitely stripped back — with the exception of some mandolins. But when you're doing medieval rock, you should have a mandolin on it. And while I wouldn't say that this is our 'Rainbow Rising', we're definitely exploring the myths of old. It's medieval rock, but it still sounds like THE DARKNESS. It's medi-urban, I suppose.…"

THE DARKNESS recently recruited Emily Dolan Davies as their new drummer. Davies, who has previously worked with Bryan Ferry and Tricky, has "revitalized" THE DARKNESS, according to Justin Hawkins. "She's a hard hitter," he told Classic Rock. "She's got the chops and the attitude that you need to be THE DARKNESS's drummer. She also makes us feel like dirty old men."

Regarding THE DARKNESS's split with founding member Ed Graham in late 2014, Hawkins said: "Ed has had some well-publicized health problems in the past. And for one reason or another, he wasn't capable of doing his job anymore. We're still friends with Ed. But now that we have Emily in the band, the worry is gone."

"Last of Our Kind" will be released on limited-edition color vinyl, compact disc and as a digital download.

"Last of Our Kind" track listing: 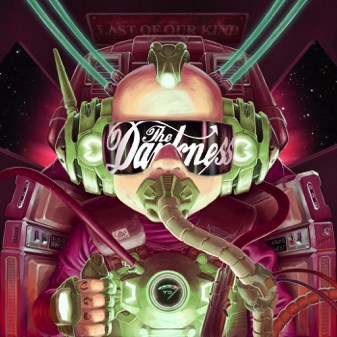