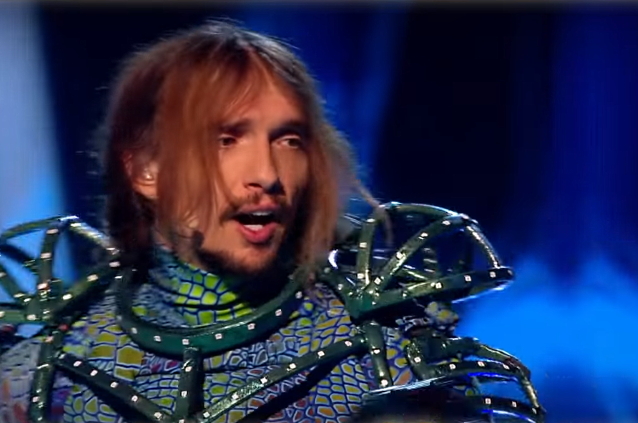 THE DARKNESS frontman Justin Hawkins has been unveiled as one of the singers competing on the celebrity show "The Masked Singer", which airs in the U.K. on ITV.

The show follows a number of celebrities performing in disguise to a live audience and judging panel, who are then tasked with guessing who is behind the mask. When each singer is knocked out of the competition, their real identity is revealed.

Hawkins, who played playing The Chameleon on "The Masked Singer", told Radio Times about his involvement in the program: "I wanted to take part in something that would be slightly surreal, and the secrecy made it a very exciting. Like having an extra-musical affair.

"Keeping secrets is challenging, especially when you effectively disappear for the duration of the filming. I used a combination of bluffery, bare-faced lies and vague muttering to explain my absences. I'm basically James Bond."

He said the "toughest" part about the show was learning "relatively modern songs."

"I'm not fond of new music, so I had to force myself to assimilate inferior compositions," Hawkins said. "Plus it was difficult to sing from within a helmet."