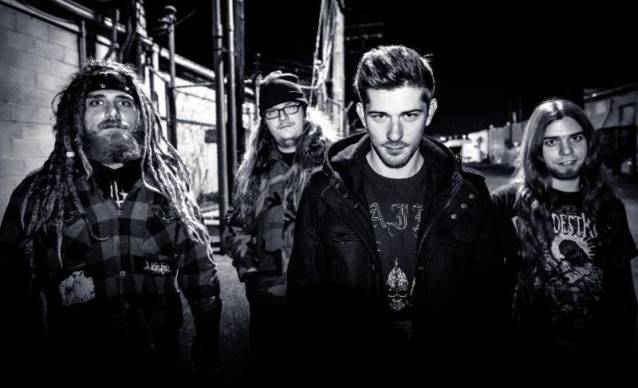 THE DRIP Signs With RELAPSE RECORDS

Relapse Records has announced the signing of the blistering grindcore quartet THE DRIP. The band's new EP, "A Presentation Of Gruesome Poetics", will be released in North America on April 15 preceded by its April 11 release in Germany and Benelux and April 14 release in the rest of the world. The EP will see release on CD, digital and LP delivery, the first press of the vinyl to bear a totally sick etching on the B-side. A relentless, skull-crushing, pissed off, high-energy, blast-riddled explosion of violence, the EP rips through six tracks in barely twelve minutes, the first release to be fully recorded at Audiosiege in Portland by Joel Grind (TOXIC HOLOCAUST),after which it was mastered by Brad Boatright (TRAGEDY, FROM ASHES RISE, INTEGRITY).

Based out of Washington state, THE DRIP unloads a belittling, ravenous style of high-potency grind, having taken cues from the forefathers of the genre like NAPALM DEATH and BRUTAL TRUTH yet contemporizing their approach to put them on par with NASUM, ROTTEN SOUND, INSECT WARFARE and the like. Several independent EPs found the band reaping accolades from U.S. press outlets like Operation Grindcore, which stated, "If you like your grindcore, metallic and overflowing with seething aggression, then THE DRIP should please you for quite some time," and Headbang or GTFO, which called the band's style "furious gut-stabbing grind that pummels your anus until it collapses on the floor."

The members of THE DRIP said in a statement; "We are proud to be a part of Relapse Records and their amazing roster of bands. It's quite an honor being label mates with some of our favorite artists, and even more exciting to be releasing our album, 'A Presentation Of Gruesome Poetics'. It is our strongest material to date, and it's ready to be unleashed to the metal scene. We look forward to 2014 and what it brings."

The second track from "A Presentation of Gruesome Poetics", the ravenous "Rise To Failure", can be streamed below.

THE DRIP has terrorized clubs and squats across the Northwest, sharing the stage with everyone from major regional acts like BLACK BREATH, POISON IDEA, THEORIES and BONE SICKNESS as well as acts touring through the Northwest with REVOCATION, DYING FETUS, PRIMITIVE MAN and others. With a steady supply of shows always being confirmed regionally, the band will take their assault beyond the Northwest on a two-week West Coast tour this summer.

Find more on The drip