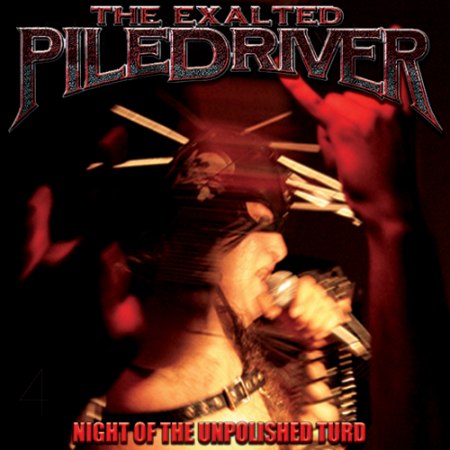 Canadian cult metal band THE EXALTED PILEDRIVER (a.k.a. PILEDRIVER) will release a new live album, "Night Of The Unpolished Turd", on April 1 via Sick Fuck Records. The CD was recorded on October 30, 2010 at the Scout Hall in Cochrane, Ontario, Canada and it features the following track listing:

You can pre-order the album at this location.

Commented the band: "[This is] an 'actual' live album, on an average night in Nowheresville, Northern Ontario, Canada. Not just the jewels in the rough, cherry-picked from 23 shows in front of some other headliner's huge audience, but ONE live performance in front of a handful of true Old-school metalheads, as is reality outside of Europe!!! The Pile-barkin' and band-playin' (every race-it-like-you-stole-it mistake included) are simply 666% GIVE 'ER TO HELL!!!!!! And the sound is waay too loud and 'wrong' at ANY volume on ANY system!!!! A true speaker-shredder as only PILEDRIVER could produce!!! Yer gonna need some industrial swabs to get this aural excrement outta yer ears, trust me!!!!"

THE EXALTED PILEDRIVER's first album in 22 years, "Metal Manifesto", was released on November 18, 2008. The CD was mixed by veteran Neil Kernon (CANNIBAL CORPSE, NEVERMORE) and it follows up the classic cult discography of the band: "Metal Inquisition" (1985) and "Stay Ugly" (1986).