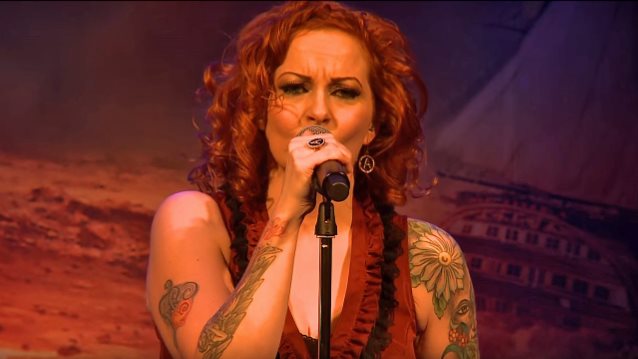 THE GENTLE STORM, the collaboration between AYREON mastermind Arjen Lucassen and former THE GATHERING singer Anneke Van Giersbergen, released its debut album, "The Diary", last year to much critical acclaim. Since then, Anneke and her specially selected band — which does not include Lucassen — have been busy touring the album and this year they will play some select shows, including South America in April and a final show in Amsterdam. To celebrate, the band has launched a live video of the track "Brightest Light", filmed in Zoetermeer. Check it out below.

Lucassen and Van Giersbergen originally crossed paths in 1998 for AYREON's breakthrough third album, "Into The Electric Castle". Ten years later they teamed up again for AYREON's seventh album, "01011001", both having established themselves as world-renowned heavy metal/rock artists in the decade between releases. Although their respective musical styles went in vastly different directions during that time, Arjen and Anneke retained a common ground that ultimately led to the creation of THE GENTLE STORM.

THE GENTLE STORM's double album is an epic production of AYREON proportions, divided into two parts as a full-on metal assault (CD1) and lighter folk arrangements (CD2). It also heralds Anneke's return to the realms of heavy guitars and soaring vocals reminiscent of THE GATHERING's breakthrough album "Mandylion".

“From the beginning, I knew that Arjen wasn't going to tour with me with the full electric band, so I immediately thought I want to make an Anneke show with the emphasis on THE GENTLE STORM songs but to also do some GATHERING songs, some Devin Townsend songs, some of my own songs. So from the beginning it was going to be a heavy Anneke show, but it's called Anneke presents THE GENTLE STORM, of course. Again I'm having a band name, which is a bit confusing sometimes to people, but I do treat it as a solo effort."

Asked about the possibility of a second THE GENTLE STORM album, Anneke said: "We have some ideas for a new album, but we also knew that I want to make a new solo album first and [Arjen is] writing for a new album of his own. I don't know if it's going to be an AYREON album or a solo album or whatever. So there will be one or two other albums in between, but I suppose we gave this a band name so it's a thing we can continue. We have some ideas for a follow-up either with the same people from the story or what happened next or whatever, so we can do lots of things in the future with THE GENTLE STORM."