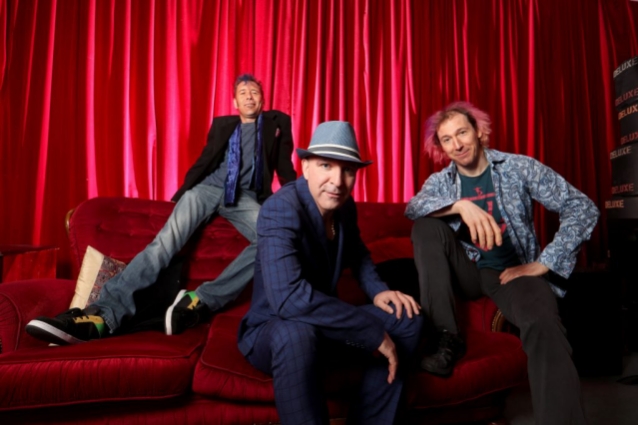 THE MUSIC OF CREAM, the pedigree of hallowed '60s trio CREAM — Kofi Baker (Ginger Baker's son),Malcolm Bruce (Jack Bruce's son) and Will Johns (Eric Clapton's nephew) — has announced an exciting new tour for 2020. Honoring the legendary band's landmark album "Disraeli Gears", the 40-date North American outing will feature "Disraeli Gears" performed in its entirety followed by a set of additional hits and rarities from CREAM, Clapton, BLIND FAITH and more. The upcoming tour finds THE MUSIC OF CREAM continuing their celebration of the extraordinary music and legacy their family members created more than 50 years ago via their extensive live show and personal stories and footage of their fathers and mentors.

With primal riffs, soaring operatic choruses, poetry, fashion and theatre rolled into one, "Disraeli Gears" defined the era in which it was written. The supergroup's second studio album, released November 1967, is often considered CREAM's crowning achievement. "Disraeli Gears", featuring the singles "Sunshine Of Your Love" and "Strange Brew", was their American breakthrough, reaching No. 4 on the Billboard 200 albums chart and ultimately becoming a platinum-seller in the U.S. The album was inducted into the Grammy Hall Of Fame in 1999 and Rolling Stone included "Disraeli Gears" in their list of the "500 Greatest Albums Of All Time", saying, "CREAM's sharpest, most linear album focused its instrumental explorations into colorful pop songs." In addition to critical acclaim over the decades, the original band members themselves praised their work on "Disraeli Gears". Ginger Baker noted, "You can't escape the fact we were having such fun playing with each other," while Jack Bruce said, "This was a whole new beginning for the band and I loved that time very much," and Eric Clapton added, "We had found ourselves…it was a pivotal point in the history of popular music."

For the members of THE MUSIC OF CREAM, who first launched their celebratory 50th-anniversary world tour in 2017 and have since performed over 100 shows together worldwide, including a string of recent sold-out U.K. shows, honoring "Disraeli Gears" and the storied history their family members created on this new tour was an easy choice.

"To follow our 50th-anniversary tour, it was a no-brainer to go out and celebrate 'Disraeli Gears' in its entirety," shares Kofi Baker (drums). "There are songs that are quite different, they wanted to challenge everything! And from a personal point of view, it gives me the opportunity to perform another song my dad wrote, called 'Blue Condition', that I really like. I also loved the artwork for the album; my sister and I used to laugh because we said you could see up my dad's nose. Happy memories that we can bring to the stage."

"Why 'Disraeli Gears'? Well, that's easy for me," says Will Johns (guitar, vocals). "It was the birth of the wah-wah pedal and you gotta love the wah-wah! That we can interpret such groundbreaking music and continue to tell CREAM's story is as exciting for us as we know it was for the band when they recorded it all those years ago. Like my uncle, I am a blues man through and through and on this record, there's some fantastic interpretations of this genre, the likes of 'Lawdy Mama' and 'Outside Woman Blues', so it doesn't get better than that!"

"There are many reasons I love the idea of performing CREAM's second album 'Disraeli Gears'," adds Malcolm Bruce (bass, vocals). "Many of CREAM's best-known songs are on the record, including 'Sunshine Of Your Love', 'Strange Brew' and 'SWLABR'. But importantly to me, perhaps my favorite CREAM song, and I think my dad's too, 'We're Going Wrong', is on there as well. It has always been such a special song to perform, so open in its possibilities for improvisation, and lyrically, the song works on a number of levels, both personal and universal. I also love some of the less well-known songs on the album like 'World Of Pain' and 'Dance The Night Away'. It even contains comedy elements in 'Mother's Lament'. Overall, it is a very cohesive set to perform. We are looking forward to it!"

During its heartbreakingly short lifespan, CREAM was an explosive musical cocktail that provided the super-group blueprint for others to follow. Their third album, "Wheels Of Fire" (1968),was the world's first platinum-selling double album, and collectively CREAM sold more than 15 million copies of their albums worldwide. Not surprisingly, Rolling Stone ranked the Rock And Roll Hall Of Fame group (inducted in 1993) as 67th in their "100 Greatest Artists Of All Time" list. The trio originally said farewell on a 1968 U.S. tour, and apart from a brief reunion in 2005 at London's Royal Albert Hall and New York's Madison Square Garden, CREAM retained an almost mythological status in the music world, right up until the passing of Jack Bruce in 2014. This, for many fans, marked the end of an era and an acceptance that there would never really be another opportunity to celebrate the group's legacy. That is, until THE MUSIC OF CREAM emerged. And with the recent passing of Ginger Baker, the new trio (Kofi, Malcolm, Will) look forward to sharing more of their stories as well as CREAM's incomparable music with fans, new and old, to keep CREAM's legacy alive. 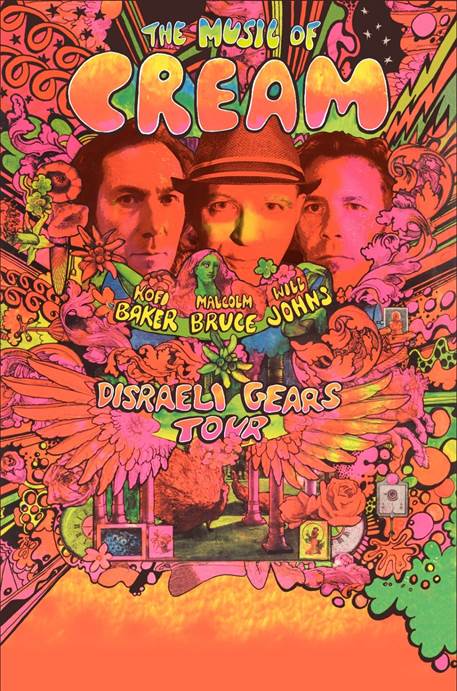