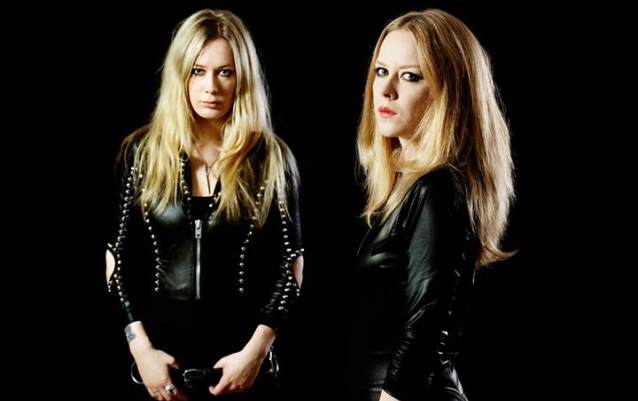 THE OATH Calls It Quits

THE OATH, the band forged around the fizzing, feral chemistry between Swedish guitarist Linnéa Olsson and German vocalist Johanna Sadonis, has called it quits.

"Thank you very much for this!

"Since our album now is released, it's time to let you know the band is over — and has been for quite some time.

"See you in the future."

THE OATH's self-titled debut album was released on March 17 in Europe and April 15 in North America via Rise Above Records. The CD was recorded in ten days at Studio Cobra in Stockholm with producer Konie Ehrencrona at the controls and the raging rhythm section of Simon Bouteloup (bass; KADAVAR, ex-AQUA NEBULA OSCILLATOR) and Andrew Prestidge (ANGEL WITCH, WINTERS).

According to a press release, "The Oath" is "a nine-song clarion call that simultaneously recalls the hallowed greats of heavy rock, punk and metal — from BLACK SABBATH, TROUBLE and ANGEL WITCH through to THE STOOGES and POISON IDEA, and further to MERCYFUL FATE and DANZIG — while revelling in new ways to express the spirit of those revered archetypes… With input from IN SOLITUDE's Henke Palm — who contributes some 'improvised VOIVOD-style solos,' according to Linnéa — and logo designed courtesy of WATAIN's Erik Danielson, this is an album that exudes ageless style and irresistible substance: a potent antidote to the flimsy fripperies of the modern age."

Find more on The oath