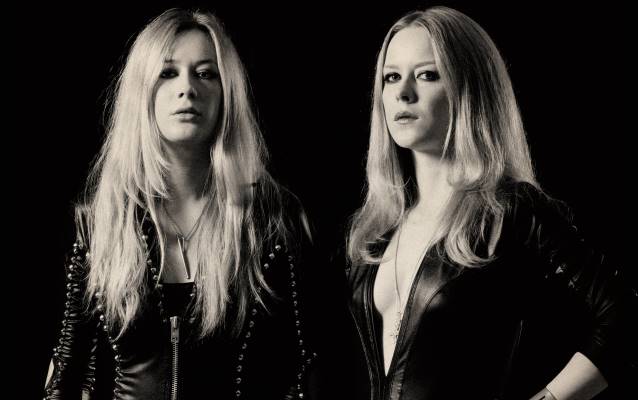 THE OATH To Release Self-Titled Debut Album In March

THE OATH's self-titled debut album will be released on March 17 in Europe and April 15 in North America via Rise Above Records.

To master the dark and wring compelling creativity from its densest shadows requires vision, belief and, perhaps most importantly, a dash of synchronicity. These are all qualities that ooze from every pore of the debut album by THE OATH. A band forged around the fizzing, feral chemistry between Swedish guitarist Linnea Olsson and German vocalist Johanna Sadonis, THE OATH represent the wild magic that erupts when two blazing souls collide and fate is sent veering off course by sheer strength of the human will. This is heavy metal at its most mercurial and intuitive.

Having found each other and discovered that their obsessions, desires and musical urges were utterly compatible and swiftly and irrevocably interwoven, Linnea and Johanna set about devising an artistic masterplan. The results of that plan are now primed to emerge, fully-formed and thrumming with primal energy and pristine passion, in the shape of THE OATH: a nine-song clarion call that simultaneously recalls the hallowed greats of heavy rock, punk and metal — from BLACK SABBATH, TROUBLE and ANGEL WITCH through to THE STOOGES and POISON IDEA, and further to MERCYFUL FATE and DANZIG — while revelling in new ways to express the spirit of those revered archetypes. Recorded in ten days at Studio Cobra in Stockholm with producer Konie Ehrencrona at the controls and the raging rhythm section of Simon Bouteloup (bass; KADAVAR, ex-AQUA NEBULA OSCILLATOR) and Andrew Prestidge (ANGEL WITCH, WINTERS) underpinning Linnea and Johanna's otherworldly hymns to the black, THE OATH is a triumph for soul and sonic ceremony, with conviction and integrity bursting from every artfully-crafted riff and ethereal melodic motif.

Veering from the strident grooves and shimmering menace of opener "All Must Die" to the breakneck, Luciferian clatter of "Black Rainbow" and on to the spine-tingling grandeur and grime of epic closer "Psalm 7", THE OATH is anything but just another addition to the modern pseudo-occult rock canon. Instead, it is an extraordinary glimpse into its creators' overpowering charisma and chemistry and a thrillingly, hyper-nourishing dose of authentic, 21st century heavy metal sorcery. With input from IN SOLITUDE's Henke Palm — who contributes some "improvised VOIVOD-style solos", according to Linnea — and logo designed courtesy of WATAIN's Erik Danielson, this is an album that exudes ageless style and irresistible substance: a potent antidote to the flimsy fripperies of the modern age.

Find more on The oath