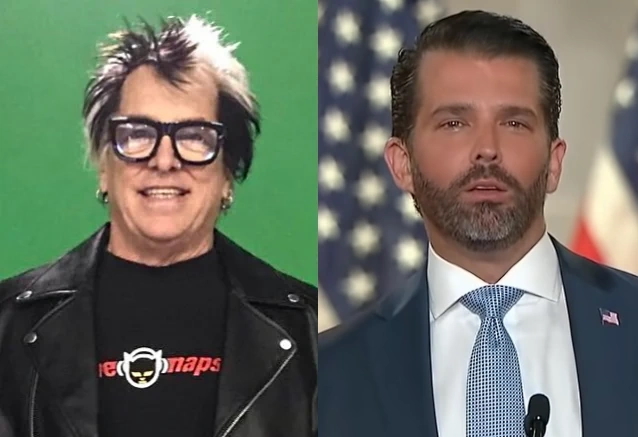 THE OFFSPRING guitarist Kevin "Noodles" Wasserman has blasted Donald Trump Jr. as a "horrible human being" after the former president's son used a display of guns as the backdrop for a video attacking teachers' unions.

In the clip, which was posted to social media, the eldest son of former president Donald Trump and executive at the Trump Organization stood in front of what appears to be a wall lined with guns and bashed teachers whom he accused have "prevented schools from opening" because they don't want to return to class unvaccinated or without proper safety protocols in place and risk their lives.

"Teachers' unions and those representing them have definitely failed our children in terms of education and everything else... certainly failed the science they are supposed to be teaching us… it is all political," Don Jr. said in the video, which was originally posted to Canadian video-sharing platform Rumble, and then promoted by Trump Jr. in a post shared to Twitter.

On Sunday (February 21),Noodles tweeted out a portion of Don Jr.'s video, and he included the following message: "What a horrible human being. Don't be like this drug-addled, self-entitled, idiotic POS. He is an idiot son of a traitor."

The National Education Association (NEA) and the American Federation of Teachers (AFT) have led the charge on behalf of teachers to ensure that school districts prioritize safety as they reopen schools while the U.S struggles to overcome the COVID-19 pandemic and resume some sense of normalcy.

Physically reopening schools has turned into a contentious issue between federal and state officials, who are pushing hard to get kids back in the classroom, and the teachers, parents, and unions cautioning restraint.

What a horrible human being. Don’t be like this drug-addled, self-entitled, idiotic POS. He is an idiot son of a traitor. https://t.co/to5jKNPEi1

The teachers unions are out of control & are destroying our kid’s futures!

A teachers Union leader was once quoted as saying almost verbatim “We’ll start worrying about the students when the students start paying union dues.”