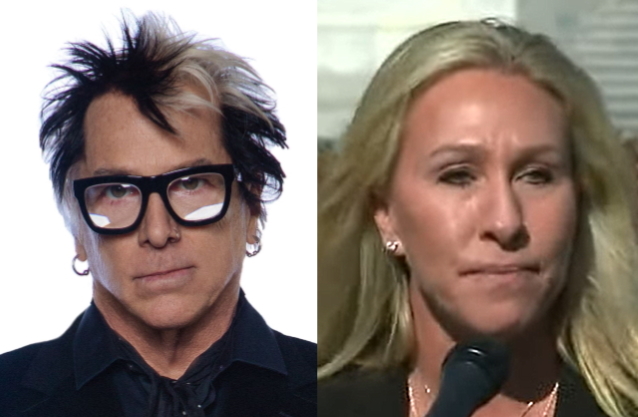 THE OFFSPRING guitarist Kevin "Noodles" Wasserman has blasted Republican member of the House of Representatives for comparing a decision to continue requiring masks in the House to the steps Nazis took during the Holocaust to control Jewish people.

Republican Rep. Marjorie Taylor Greene, in a conversation with the Christian Broadcasting Network's David Brody Real America's Voice TV show "The Water Cooler", attacked House Speaker Nancy Pelosi and accused her of being a hypocrite for asking GOP members to prove they have all been vaccinated before allowing members to be in the House chamber without a mask.

"You know, we can look back at a time in history where people were told to wear a gold star, and they were definitely treated like second-class citizens, so much so that they were put in trains and taken to gas chambers in Nazi Germany," Greene said. "And this is exactly the type of abuse that Nancy Pelosi is talking about."

Earlier today, Noodles took to his Twitter to share a video clip of Greene making her comments, and he wrote in an accompanying message: "Holy shit! People actually voted for this tweaker's nightmare! This is today's @GOP and a perfect example of why we need to move on without them. #PartyofTheInsane".

According to CNN, every Democrat of Congress in both the House and Senate is fully vaccinated. In the Senate, 92% of Republicans say they are vaccinated, but only 44.8% of House Republicans would say if they have received the necessary shots.

This past February, THE OFFSPRING singer Bryan "Dexter" Holland told the Minneapolis, Minnesota radio station 93X that he doesn't consider THE OFFSPRING "a political band." Noodles concurred, saying: "We try to ask questions. It could be about society, about personal relationships, or it could be about what we see happening in the world. In this case, it's what we see happening in the world on both the political stage and on the personal stage. So it's more kind of an expression of ideas that pose a question. At least that's what we're hoping for — rather than try to tell people what to think." Dexter added: "When you say the word 'political,' that sounds like you're gonna try to force your opinion about something on someone, and that's not what we're trying to do at all. We're making observations and leaving it up to you to make your own conclusions."

Holy shit! People actually voted for this tweaker’s nightmare! This is today’s @GOP and a perfect example of why we need to move on without them. #PartyofTheInsanehttps://t.co/KcwFtLVFHT