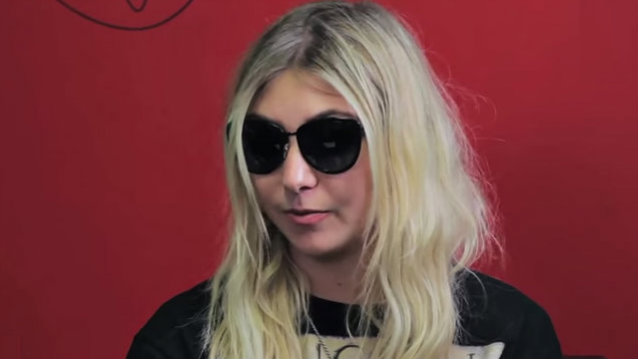 THE PRETTY RECKLESS Acoustic Album In The Works

THE PRETTY RECKLESS singer Taylor Momsen has confirmed that the band is working on an acoustic album, to be released in the coming months. "We just recorded an acoustic version of a medley," Momsen told LA Rock of the Jacksonville, North Carolina radio station Rock 105.5 on September 17 (see video below). "It's how we originally wrote the songs, so it's kind of an inside take, or look, into how [the sophomore THE PRETTY RECKLESS album] 'Going To Hell' actually started. 'Cause everything started acoustically."

She added: "If you can't play it all the way through, front to back, on an acoustic guitar, then it's not a good enough song to bring in the band."

Momsen was also asked if the rumors are true that she is writing a book. "I'm always writing," she replied. "I'm writing a book, I'm writing a screenplay, I'm writing… I've already written half the next record. Writing inspires writing, art inspires art, so it's kind of a never-ending process, and you're just kind of trying to always be in the creative mindset."

THE PRETTY RECKLESS released their debut album, "Light Me Up", in 2010 and followed it up this year with "Going To Hell", which came out last March.

The new disc has yielded two No. 1 rock radio hits with "Heaven Knows" and current single "Messed Up World", making THE PRETTY RECKLESS the first female-fronted act to have its first two singles both hit the top spot.