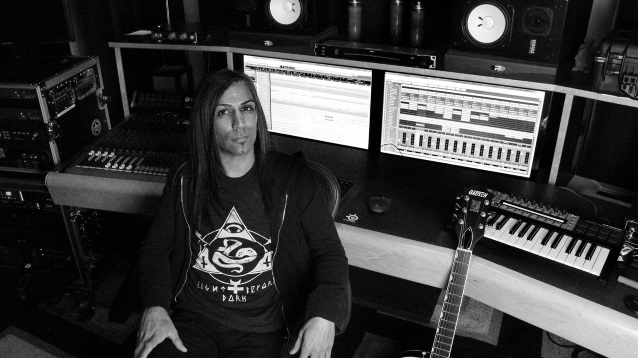 POP EVIL, whose latest, self-titled album album was produced by Khandwala, said in a statement: "Today our world stopped. We lost a mentor, a brother, a leader, but most of all a good friend. Kato, thank you for helping bring positivity and fun throughout this last album we made together. Our lives are forever better having you been in them. So blessed we were able to work with you. You will forever be loved by the POP EVIL family."

HALESTORM frontwoman Lzzy Hale said: "Kato Khandwala, you will forever be a part of the HALESTORM family. Thank you for touching this universe with your music and your amazing ability to bring out the best in the artists you worked with. My friend, even though you can't be with us in the same form you were... you burned bright, and that light will never be lost on us. My heart also goes out to Kato's family and loved ones in this hard time."

BAD WOLVES singer Tommy Vext stated: "It doesn't seem real. I don't understand this. I keep trying to think what you would say to me right now if you were here. Kato Khandwala... father, son, partner, producer artist and to so many of us in the industry, a brother. Your kindness, guidance and unwavering support for me and almost anyone you came into contact with was inspiring. You were an example of living your life with integrity, love and peace in your heart. You always reminded me to live in the moment. You came into my life and continued throughout our friendship to have a profound impact on my sobriety. You taught me the power of defining my value as an artist and how to ask for and accept what I deserved graciously. For all these reasons and more, I am a better man for having known you. My heart goes out to your children, your mother and Shannon. I love you so much and I'll see you on the other side."

Khandwala, who has also worked with BLONDIE, BREAKING BENJAMIN, PAPA ROACH, DROWNING POOL and PIERCE THE VEIL, among others, first met THE PRETTY RECKLESS frontwoman Taylor Momsen in 2008 and helped her cut her band's first album, "Light Me Up". He has since produced all of THE PRETTY RECKLESS's recordings.

In a 2017 interview with Alto Music, Kato stated about his working relationship with THE PRETTY RECKLESS: "A band like THE PRETTY RECKLESS, it's an extraordinarily creative team of people. So I wouldn't say I am trying to shape anything in any particular way. What I am there to do, though, is to make sure that they're always operating at their very best. So that goes from the writing to the performances to taking risks and being experimental and maybe stepping a little bit outside of their zone. So I try to create an environment where they feel comfortable to experiment and try things."

Asked if he goes into a particular "mode" when working with artists who play a different style of music, Kato said: "No, I don't have a mode to go into, and I rarely know exactly what to do. Even when I'm in the middle of it, every song, every mix, I usually get about half way through and think that it's terrible and I suck until something clicks. I just keep working, I just keep working. But I do do a lot of talking with the artist: 'What do you want? What are you looking for? Tell me your five favorite bands. Tell me your favorite records. What are we going after here?' I really try to understand what it is they're trying to accomplish. And more often than not, the song dictates what it should sound like anyway; it's fairly obvious."

Today our world stopped. We lost a mentor, a brother, a leader, but most of all a good friend. Kato thank you for helping bring positivity and fun throughout this last album we made together. Our lives are forever better having you been in them. So Blessed we were able to work with you. You will forever be loved by the Pop Evil Family @rockkato

Kato Khandwala, you will forever be a part of the Halestorm family. Thank you for touching this universe with your music...

It doesn’t seem real.
I don’t understand this.
I keep trying to think what you would say to me right now if you were...