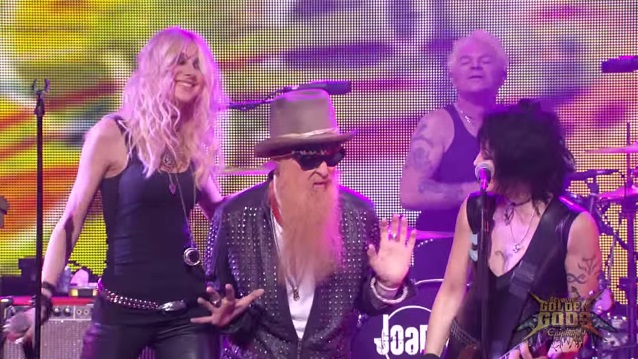 According to The Pulse Of Radio, THE PRETTY RECKLESS singer Taylor Momsen recently revealed that ZZ TOP frontman Billy Gibbons got very friendly with her when the two of them appeared together onstage at the 2014 Revolver Golden Gods awards in May. Momsen and Gibbons showed up to perform with Joan Jett and Momsen recalled how the day went. "A little bit of a hectic chaos, but a good time nonetheless," she said. "Joan Jett's the coolest chick ever, so it was a blast playing with her, and we got a surprise guest with Billy Gibbons and he touched my butt. He was just lookin' for some tush."

THE PRETTY RECKLESS has unveiled a racy new video for the song "Messed Up World (F'd Up World)", the next single from the band's second album, "Going To Hell". Momsen co-directed the steamy clip with Jon J.

"Going To Hell" was released in March and debuted at No. 5 on the Billboard album chart.

THE PRETTY RECKLESS recently finished a run of festivals in the U.K. and is playing scattered events back home in the U.S. throughout the summer.