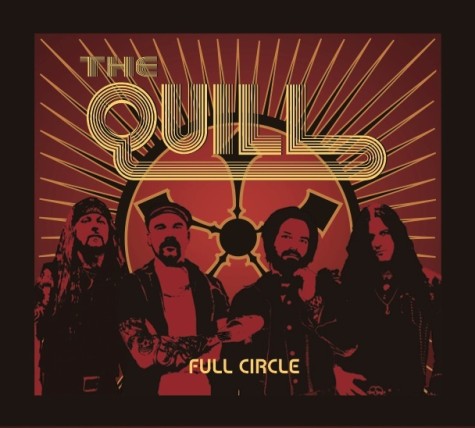 "Medicine", the new video from Sweden's THE QUILL, can be viewed below. The clip was shot in October during at Tierp Arena in Sweden — Northern Europe's most acclaimed new raceway for drag racing. It was shot live in front of racers, personnel, firemen and, of course, the thousands of wild drag-racing fans on site.

Commented the band: "The idea to mate top-fueled rock n' roll with testosteron-saturated dragracing is [hardly] new, and we understood from the beginning that if we were to do this, it was absolutely vital to make the video stick out from the crowd. Now, with a very modest budget at hand, the solution for this was to avoid doing it 'the easy way' and use TV footage as so many others have done it before. Instead the band was actually performing the song over and over, placed dead center in the middle of the action in the frantic starting pit... And... wow! It was a... err... loud experience both for the band and the crew, we can assure you that. Just to stand so close to a fuming dragracer on idle is an experience in itself. To stand just feet away from two of those monsters gunning it flat out is an out-of-this-world thing... The objective was to catch those explosions of energy and transform it in the video. We think we succeeded."

"Medicine" comes off THE QUILL's new album, "Full Circle", which was released on June 24 in Europe and July 26 in North America via Metalville Records. According to a press release, the CD "is packed with heavy rock firmly rooted in the Seventies but vibrant and updated rather than retro. Yes, there's a new twist to the sound. Less is more, if you will. The songs are sharp, direct and catchy, built around big riffs, big grooves and big hooks. Just check out 'Sleeping With Your Enemy' and try to get that chorus out of your head. Surrender to the up-tempo outburst of energy that is 'Medicine'. And physically feel how 'Bring It On' simply rocks like a motherfucker. Very much classic rock and yet contemporary in the FOO FIGHTERS / QUEENS OF THE STONE AGE vein. Needless to say, THE QUILL is a band reborn."

With the touring cycle for THE QUILL's fifth album, "In Triumph", completed, the band and singer Magnus Ekwall parted ways and THE QUILL was put on the backburner. Drummer Jolle Atlagic joined now-defunct Finnish glam legends HANOI ROCKS — touring Europe and Japan in the process — and also did a stint in THE REAL MCCOY band alongside FOO FIGHTERS guitarist Chris Shiflett. Christian Carlsson (guitar) and Robert Triches (bass) also kept busy with other projects. In early 2010, it was THE QUILL time again. Songs were written and Magz Arnar filled the vacant vocalist spot. It was a perfect match. The versatile singer has heaps of energy and a powerful voice that fits THE QUILL like a glove. Magz has the required range to sing the old stuff but also a rawness that the band was looking for.