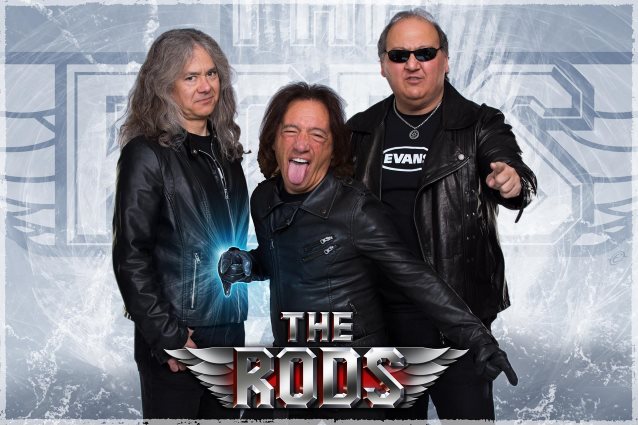 THE RODS Sign With STEAMHAMMER/SPV; 'Louder Than Loud' Album Due This Year

Legendary metal band THE RODS has inked a worldwide deal with Steamhammer/SPV. The group — consisting of original members David "Rock" Feinstein (guitar, vocals),Carl Canedy (drums) and Garry Bordonaro (bass) — has always delivered a classic brand of metal and hard rock with strong influences that date back to 1970s.

Canedy says: "The third time's a charm! After two unsuccessful attempts, to work with Olly Hahn and Steamhammer/SPV, it's finally happening. THE RODS have signed a worldwide deal for their brand new album, 'Louder Than Loud'. This album, in my opinion, has some of the strongest RODS material in years. The title says it all!"

Olly Hahn, A&R and international product manager at Steamhammer/SPV, addds: "I remember when I saw an ad for the album 'Wild Dogs' in a German magazine back in 1982. I immediately had to have the album although I had no idea what I can expect music-wise. The cover was so awesome, and when I put the album on my turntable, I was blown away. Now, thirty-five years later, it's fantastic to say the following sentence: We're proud and happy to welcome THE RODS to our big Steamhammer family!"

THE RODS is a classic heavy metal trio that rocked its way through the '80s with classic albums like "The Rods", "Wild Dogs" and "In The Raw", featuring a powerful, raw energy that led them to share the stages with some of today's greatest metal bands, including JUDAS PRIEST, IRON MAIDEN and METALLICA.

"Louder Than Loud" will be released later in 2017, to be followed by many live shows and festival appearances.