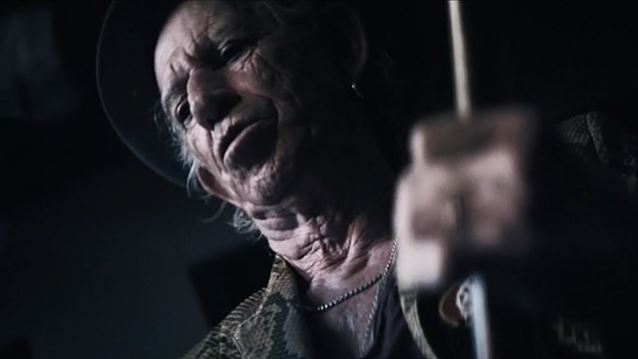 THE ROLLING STONES guitarist Keith Richards has slammed the current rock scene, telling the New York Daily News that "it sounds like a dull thud to me. For most bands, getting the syncopation is beyond them. It's endless thudding away, with no bounce, no lift, no syncopation."

Richards was equally critical of heavy metal, telling the Daily News. "Millions are in love with METALLICA and BLACK SABBATH. I just thought they were great jokes."

In a 2007 interview, METALLICA drummer Lars Ulrich spoke about the experience of opening for THE ROLLING STONES at a pair of shows in San Francisco in November 2005. He told "The Opie & Anthony Show": "We were in the middle of some chill time after the 'St. Anger' tour and one day it was like, 'The STONES wanna know if you wanna open for them in San Francisco,' and it was like, 'Duh, of course, we will. Just name the day and place and we'll be there.' We obviously hadn't opened for anybody for a few years but if you're gonna open for anybody, open for the STONES. I mean, c'mon!"

He continued: "It's the second show — [we played] two shows [with THE ROLLING STONES] in a row — and some assistant with, like, five walkie-talkies and a water-bottle holder, whatever, comes in before the show and says, 'Do you want your picture taken with THE ROLLING STONES?' We were like, 'You know what? Sure. Why not?' So after our show and then they're getting ready to go on, this assistant comes in and says, 'Okay, be ready in five minutes' or whatever. So she comes in, she escorts us into this place in the tunnel leading into the stadium and she says, 'Wait here.' As we're standing in this tunnel, literally, and this band EVERCLEAR — who were playing also — they were kind of like over there on their 'X'. So we're standing there and we go over and say 'Hello' to the guys in EVERCLEAR, 'Hey, how was your show?' And this assistant comes back and says, 'No. The guys in METALLICA stay here, and the guys in EVERCLEAR stay over here.' We were like, 'Whoaaah.' So then about five minutes later the STONES come in, and I swear they didn't stop — they slowed down their pace, or their walk, just slow enough to get, like, two or three pictures taken, two or three frames shot with EVERCLEAR, and then they came over to where we were standing waiting, and they all looked at us… No, actually, Charlie Watts said 'Hello' and I think Keith [Richards] nodded or something, and Mick [Jagger] looked like we were all gonna give him pneumonia or something — he had this disgusting look on his face. And then they slowed down long enough while the photographer took two or three frames, and then they walked off. And then the assistant came over and said, 'If the band approves the photo, we'll send you a copy.' That kind of sums up THE ROLLING STONES experience. [Laughs]"

Ulrich added: "Being up on stage, that was awesome and the legacy and the whole thing, but that kind of left me with a little bit of a strange taste in my mouth… If we ever pulled that, would you come and find me and shoot me? I mean, seriously? But it was a great night and getting a chance to just be part of… If you can sit there and tell your kids, 'I opened for IRON MAIDEN, I opened for DEEP PURPLE, and I opened for THE ROLLING STONES,' then you're pretty much good to go, you know what I mean?"

Richards's new solo album, titled "Crosseyed Heart", will be released on September 18 via Virgin EMI/Universal Music. It is his first solo work in 23 years.

Keith wrote or co-wrote the majority of the tracks on "Crosseyed Heart", many with co-producer Steve Jordan.

Richards, who plays electric and acoustic guitars, bass, piano and vocals on the album, is joined by guitarist Waddy Wachtel, keyboardist Ivan Neville and background singer Sarah Dash, part of the X-PENSIVE WINOS, who accompanied Richards on his previous solo records.