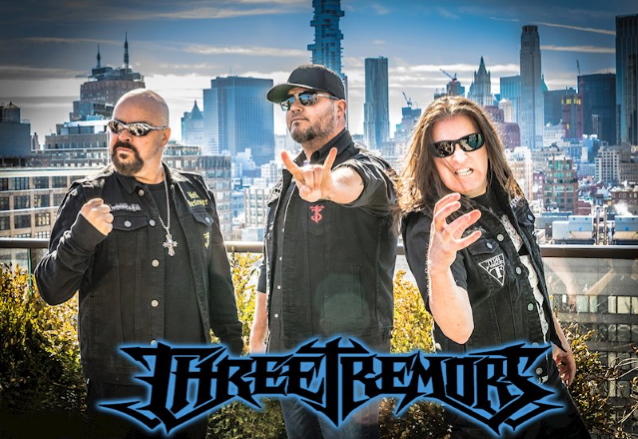 THE THREE TREMORS, the project featuring acclaimed heavy metal singers Tim "Ripper" Owens (JUDAS PRIEST, ICED EARTH, YNGWIE MALMSTEEN),Harry "The Tyrant" Conklin (JAG PANZER) and Sean "The Hell Destroyer" Peck (CAGE, DEATH DEALER, DENNER/SHERMANN),will release its second album, "Guardians Of The Void", on November 5 via Steel Cartel Records. The official music video for the LP's second single, "Crucifier", can be seen below. The haunting clip captures the essence of the song which tells the tale of an avenging angel exiled on earth and hellbent on revenge.

Owens said about "Crucifier": "This is one of my favorite tracks on the record." Peck added: "When the band wrote this song, I knew we had a special track on our hands. It has a super-haunting vibe and I love the chorus how it hits. I am sure my fellow metalheads will dig it like I do." Conklin chimed in: "This was one I insisted we add to the live set. I can't wait to sing this with the band."

Coming off the successful release of their self-titled debut album, several North American and European tours, release of the solo versions of the first album, and some festival performances, THE THREE TREMORS shot out of a cannon at a frantic pace. They were pursuing an aggressive pace of live performances when the shutdown forced them to cut short their North American tour in the middle of their run in early 2020. They wasted no time, however, and got to work on another new album. Now their sophomore effort "Guardians Of The Void" is ready for blast-off.

Twelve songs are found on this wicked rocker of an album and once again they cover all the bases of heavy metal. As with all Steel Cartel releases, only the songs that receive video releases will be on the streaming platforms, so the physical medium and the fans that support and collect them, are the bands priority and focus.

And speaking of great physical product, THE THREE TREMORS has once again hired Marc Sasso to do the cover artwork once again. Sasso is best known for his work with such companies as Marvel, the WWE and HALFORD, DIO, CAGE and many others. He has hit it out of the park once again with this haunting, otherworldly painting that captures the mysterious essence of the album title perfectly.

Owens describes how the recording process went down: "We had just started our second North American tour promoting the solo versions that we had just released, when everything started to shut down. It was a shame because we had some really good momentum and the shows were selling well, including a few that were sold out in advance. When we realized that we could be sitting home for a while, we all started putting these new songs together and recording them."

Harry said: "I had moved to Greece during this whole time and they guys started sending me song after song at a furious pace. The songs were kickass, and I found it easier and more natural to collaborate and add my ideas and nuances this second time around. We have toured and done so many shows together now the comfort level was there and they came together really quick. The end result is amazing, I think."

Sean added: "Everyone in the band has a lot of other projects going on, so it was good we could all pull together and make this follow up album. Now Sean [Elg], our drummer, is also in KK'S PRIEST with Ripper, so we are stoked that we could not only put out another record but also get a tour in before everyone gets busy. We have spent so much time together we are like a heavy metal street gang and have a blast performing these songs and going on the road. With these new songs available from the 'Guardians Of The Void' album, our setlist will be even more vicious than before, if that is even possible, ha!"

There will be three different versions of the double gatefold vinyl of "Guardians Of The Void": the original version, the 1-in-5 variant version and the virgin cover version. The 1-in-5 variant version has completely different cover art (again by Sasso) on the front and back and will be limited to one copy for every five standard versions that are produced. The virgin cover version has the original Sasso artwork without band logos or album titles.

Catch the THREE TREMORS on tour in the United States this November. 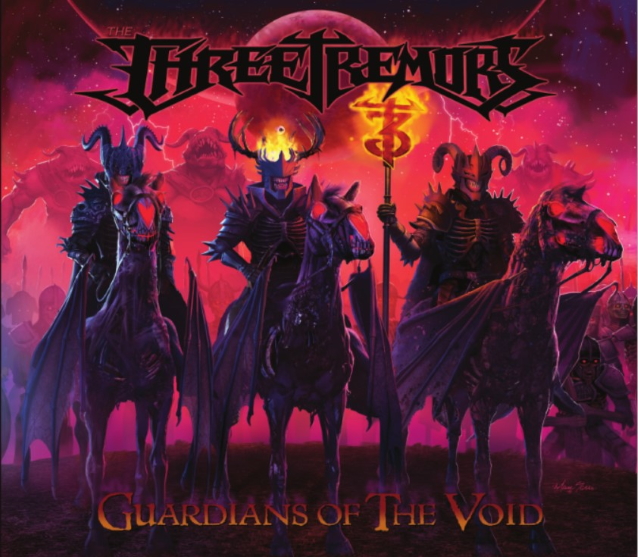 Find more on The three tremors