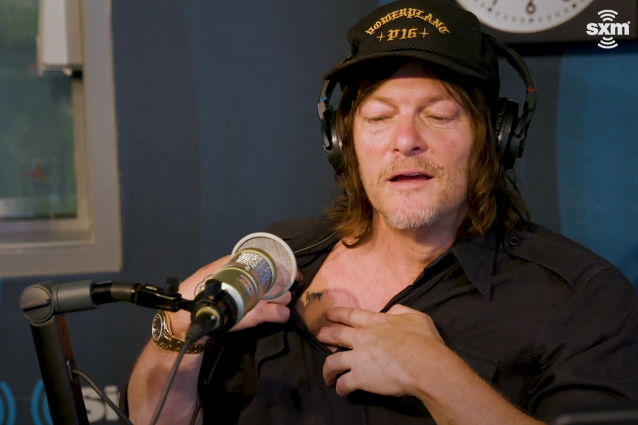 "The Walking Dead" star Norman Reedus joined SiriusXM's Jose Mangin on Octane to talk about his new book "The Ravaged". Additionally, Reedus is taking over SiriusXM's Octane and Liquid Metal channels all weekend long, playing songs from his favorite heavy bands such as MASTODON, MOTÖRHEAD, ANTHRAX, JUDAS PRIEST, SLAYER and more. During his conversation with Mangin, Reedus shared his ANTHRAX story, talked about getting a Lemmy tattoo, discussed his music influences and much more.

Speaking about his Lemmy tattoo, Norman said: "It's a little tiny one. They gave us five minutes to get it. [MASTODON's Brent Hinds and I] were shooting 'Ride [With Norman Reedus]' [Reedus's AMC motorcycle riding American adventure series]. We were in New Orleans and we went by a tattoo shop. This guy named Cornbread and we went in and Lemmy had just died and we're, like, 'We've gotta get a Lemmy tattoo.' And they go, 'You have five minutes.' And we ran in and got one really quick and ran out the door, Brent and I."

Released on May 10, "The Ravaged" follows three people on different journeys that Reedus has described as "a story of hope and growing up." The first character, Jack, heads to South America with nothing but his demons and a backpack after losing his family. The second, Hunter, travels to California and discovers a secret past after his father dies in a mysterious fire. And the third, 17-year-old Anne, flees Tennessee after her older brother attacks her, and makes her way to Alabama with her best friend. Their individual stories parallel one another but take each person on a personal journey that will change them forever.