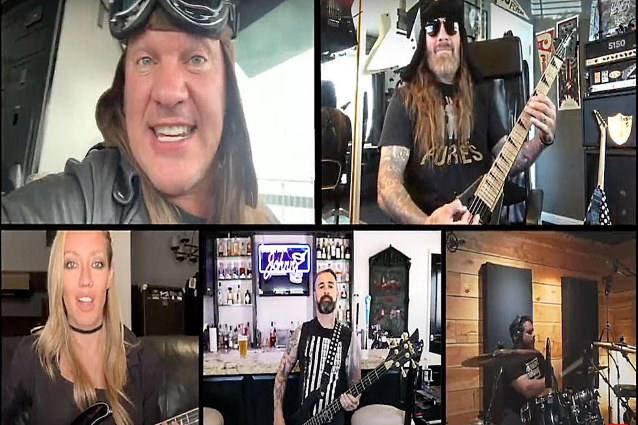 Jericho said: "Once again in the middle of a pandemic, I had the honor of getting together with some amazing musicians to play a cover of one of my favorite bands best songs! 'Aces High' is not only one of the hardest vocals I've ever had the pleasure of singing in a studio, they were even harder to record while I was flying a fighter plane! As a result, I think the power (slave) of this song fits perfectly into the hard rock world of today and I'm excited to see 'Aces High' fly as high up the charts as the protagonist of the song itself! So head up the runway, let off a shot burst and UP THE WHEELBLOCKS!"

Asked by Loudwire if there are any plans for THE WHEELBLOCKS to record more material beyond "Aces High", Jericho said: "Absolutely. The idea was one and done, record it, put it online. It was mixed by Kile Odell, who did the last FOZZY Top 10. I wanted it mixed properly and I told him the same thing I told him when I did the KUARANTINE songs. I said, 'Pretend IRON MAIDEN is a brand new band and this is their song in 2020. I don't want it mixed like it's 1985. Let's take the song and mix it like it's now.' It's going to sound great on the radio as our song. Same with the video, it was edited by a great editor out of Seattle called Dima Levanchuk. I wanted it done professionally and to make something out of this and I think that's why it's going to go further than just your regular supergroup-Instagram-YouTube thing. We're going to take it to radio and put a little bit of steam behind it and see how far that goes. If we end up with a hit like we did with KUARANTINE, I’d love to do more with WHEELBLOCKS. It's a great collection of people and musicians, for sure."

Jericho is also a member of another rock "supergroup", the aforementioned KUARANTINE, which performs cover versions of songs from the non-makeup era of KISS. That band has released two singles so far, "Heart Of Chrome" and "No No No", via Madison Records with distribution by The Orchard. Jericho is joined in KUARANTINE by drummer Kent Slucher (LUKE BRYAN),guitarist Joe McGinness (KLASSIK '78) and bassist PJ Farley (TRIXTER).