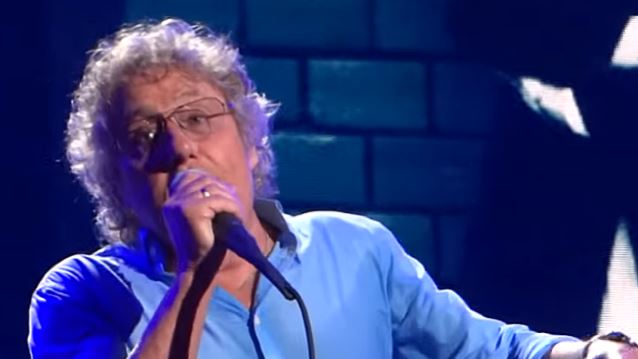 THE WHO's ROGER DALTREY On AXL ROSE Singing For AC/DC: 'Give Me A Break'

During a brand new interview with Postmedia Network, THE WHO frontman Roger Daltrey was asked for his opinion on the news that Brian Johnson was retiring from AC/DC because he risks substantial hearing loss if he continues to perform in large arenas and stadiums. Daltrey said: "I mean, I really feel badly for Brian. It must be heartbreaking for him after all the service he's given that band over the years.

"I thought [AC/DC's] farewell statement to the press and to Brian was fairly curt, to say the least. I felt for him. That must have hurt."

He continued: "I've spoken to Brian. He's got loads of other things he wants to do in his life.

"I think AC/DC will miss Brian much more than Brian will miss AC/DC. There you go. What do you expect from Australians? [Laughs]... And he's such a lovely guy, Brian. I've known him for 40-odd years, more..."

As for the announcement that Johnson will be replaced by GUNS N' ROSES singer Axl Rose for the remainder of the "Rock Or Bust" world tour beginning May 7 in Lisbon, Portugal, Daltrey said: "I mean, go and see karaoke with Axl Rose? Give me a break. [Laughs]"

Johnson issued a statement on Tuesday detailing the hearing problems that forced him to stop touring. While he promised to continue recording, he couldn't say whether he would ever perform onstage with AC/DC again.

"Being part of AC/DC this past 36 years has been my life's work," he said. "I cannot imagine going forward without being part of that, but for now I have no choice. The one thing for certain is that I will always be with AC/DC at every show in spirit, if not in person."

Johnson said his hearing problems were interfering with his ability to perform. "I was having difficulty hearing the guitars on stage and because I was not able to hear the other musicians clearly, I feared the quality of my performance could be compromised," he explained. "Our fans deserve my performance to be at the highest level, and I will not disappoint our fans or embarrass the other members of AC/DC."

He added that he has continued to consult with doctors, and was told that he could not "perform on stage at arena and stadium size venues where the sound levels are beyond my current tolerance, without the risk of substantial hearing loss and possibly total deafness."

Looking forward, he said, "My entire focus is to continue medical treatment to improve my hearing. I am hoping that in time my hearing will improve and allow me to return to live concert performances. While the outcome is uncertain, my attitude is optimistic."