The longtime solo artist addressed the possibility of fresh material from THE WINERY DOGS while sharing his latest solo video, "Raise The Cain", which features a guest appearance by Portnoy. Asked by a fan on Instagram why he doesn't record another WINERY DOGS album, Kotzen responded: "Believe me this is something that all three of us have discussed and absolutely want to do. Reality is that WINERY DOGS is a band and in order for us to write and be true to the spirit of the group we need to be in a room together for an extended period of time. With [Mike Portnoy] in [Pennsylvania], [Billy Sheehan] in [Tennessee] and I in [California] and the creepy evil Covid-19 still lurking about this poses a temporary obstacle. Rest assured the DOGS are not dead just resting up for a good run once the gates open up again!"

THE WINERY DOGS were founded in 2012 after Portnoy and Sheehan — who initially aimed to collaborate with former WHITESNAKE and BLUE MURDER guitarist John Sykes — reached out to Kotzen, who played with Sheehan in MR. BIG from 1997 to 2002. The group's 2013 self-titled debut reached No. 27 on the Billboard 200 after selling more than 10,000 copies in the U.S. during its first week of availability. The initial sales of follow-up effort "Hot Streak" were even better, as the album debuted at No. 30 in late 2015 after shifting 13,000 equivalent album units in America during its first week of availability.

This past January, Portnoy told Sonic Perspectives that THE WINERY DOGS' 2019 tour was done "just for the fun of it — just for no other reason than to play together again, because it had been a few years. I think it reignited our love for each other, and I think it showed us that there's still so many fans out there that love this band," he explained. "It reignited our desire to make another record, so I think as soon as we can, we will."

"Raise The Cain" marks the first new solo music from Kotzen since the release of his 22nd solo album, "50 For 50", which came out in February via his own custom label, Headroom-Inc. That three-disc set was just what the title implies: a collection of 50 previously unreleased compositions produced, performed and written by Kotzen in honor of his birthday. 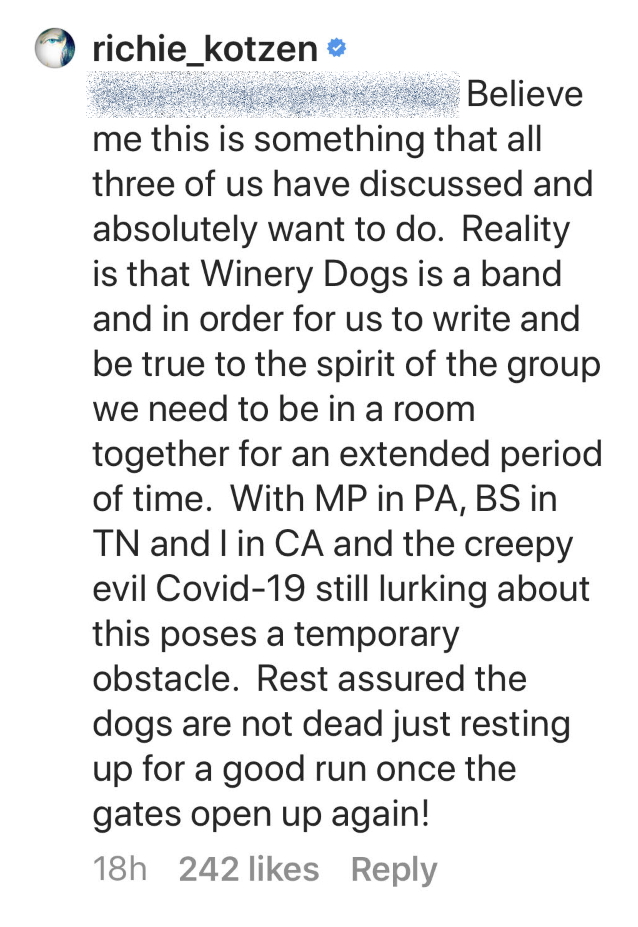