THE WINERY DOGS: Listen To Live Version Of 'Criminal' From Special Edition of Debut Album

Set for release on April 15, "The Winery Dogs Special Edition" will consist of two-CDs. Disc 1 is the standard album and Disc 2 is entitled "Unleashed In Japan 2013", featuring 10 songs recorded live in Japan during the band's July 2013 tour, including "Criminal", a track previously unavailable in the U.S., along with a 16-page booklet of live photos and lyrics. A deluxe package for die-hard fans will be released simultaneously. "Dog Treats: The Winery Dogs Deluxe Special Edition" will be sold in a box resembling a box of dog treats, and will include the "Special Edition" collection of music, a DVD featuring four music videos and interview footage, demos from the original recording sessions, a "studio diary" written by Mike Portnoy, as well as some unique merchandise unavailable elsewhere.

The aforementioned live version of "Criminal" can be streamed using the SoundCloud widget below.

THE WINERY DOGS' self-titled debut album sold around 10,200 copies in the United States in its first week of release to land at position No. 27 on The Billboard 200 chart. Released in North America on July 23, 2013 via Loud & Proud Records and in Japan on May 15, 2013 via Victor Entertainment, the CD was mixed by Jay Ruston, who has previously worked with ANTHRAX, ADRENALINE MOB, STONE SOUR and STEEL PANTHER.

"Bands like [LED] ZEPPELIN and THE WHO, THE [ROLLING] STONES, and THE BEATLES, CREAM, and [Jimi] Hendrix. I mean, I grew up with that stuff," Portnoy told Voice Of America. "And, although I've been able to pay tribute to it throughout my career with tribute bands and things like that, I've never been in an all-original band that was kind of playing classic rock power trio stuff. That's how I describe this band: just a straight-up rock band."

Regarding the songwriting process for THE WINERY DOGS' album, Portnoy said: "In all cases, the music was the very first element and from there, Richie would start melodies on top of it. Sometimes the final lyrics were there, coming up on the spot, and other times he would take the melodies and write lyrics later. There were a couple of examples of Richie having something and bringing it in. In those cases, like 'Damaged' and 'Regret', we just left them. Because in those two particular cases, the songs were great as they were."

Portnoy was full of praise for his THE WINERY DOGS bandmates, telling Voice Of America: "Billy Sheehan is my favorite bass player on earth and he has been for almost 30 years now. So to work with him and make music with him for me is an honor. And Richie is someone I have the utmost respect for as an artist. I mean, he is just so underappreciated, not only as a guitarist, but as a singer and a writer as well. I think for me, the most exciting aspect of this band is for people to discover Richie that aren't aware of what a musical genius he is." 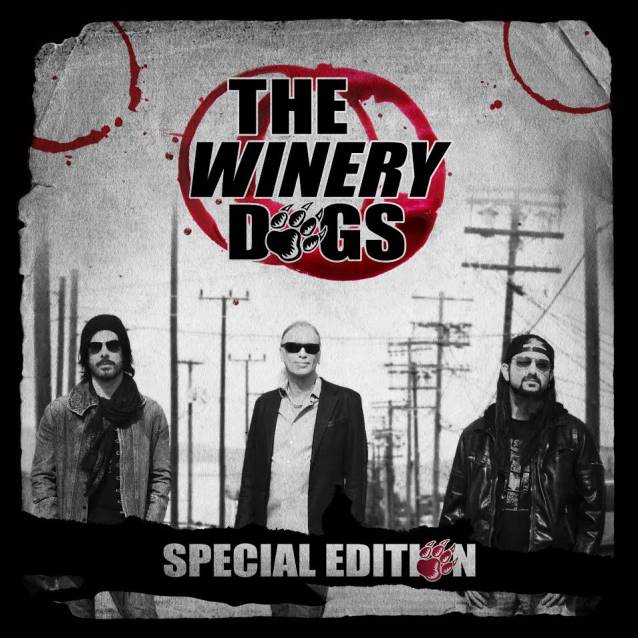