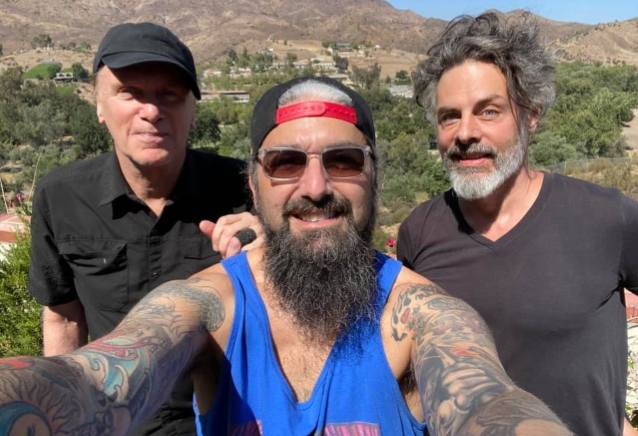 During an appearance this past Monday (January 10) on SiriusXM's "Trunk Nation With Eddie Trunk", guitarist/vocalist Richie Kotzen spoke about the progress of the recording sessions for the third album from THE WINERY DOGS, his power trio with legendary bassist Billy Sheehan (MR. BIG, TALAS, DAVID LEE ROTH) and drummer Mike Portnoy (DREAM THEATER, AVENGED SEVENFOLD). He said (as transcribed by BLABBERMOUTH.NET): "THE WINERY DOGS record, I would say, is probably 85 percent done. I've got all my guitars done and all my lead vocals and a couple of harmonies here and there. But basically now, what I'm looking to do, and what we're looking to do, is to get Mike to do some percussion and we want Billy and Mike to do their vocal harmonies — you know, get their voices on there. And then once they do their harmonies and whatever percussion Mike wants to do, then I'll take it back and maybe tweak a few things, and maybe I'll do a couple of overdubs here and there. And it'll be done before you know it. I think it's gonna be done pretty quick."

Asked if the new WINERY DOGS album will be released in 2022, Richie said: "That I don't know. We didn't really discuss when we're gonna release it. And the thing is, like a lot of acts, I'm sure, THE WINERY DOGS is such a touring-type thing — I think a lot of the magic with that group comes together on stage — and so we wanna make sure that when we set this up that we can get out in front of people and play. And now, obviously, it's a little choppy trying to organize all this. I think once the thing's done and we can sit back and listen to it and it's mixed and we can go, 'Okay, this thing is done and ready,' then we're gonna come up with a plan on how to release it and when to release it. But to guess at it, the soonest, I think, would be, like, the end of this year, beginning of next year. I think that's realistic — to set it up right and make sure that we have a way to get it out there."

As for the musical direction of the new WINERY DOGS material and how it compares to the band's first two albums, Richie said: "Well, you know, we never discuss direction; we just go and write and see what comes out. But in sitting back and listening to it, as it is now in its current state, it reminds me more of the first album than the second album, only because on the second album, I think, the production, we went into a few different directions. Some of the songs — I don't know — I think we explored some territory on the second record that didn't exist on the first record. And this stuff, to me, sounds a little more raw, I guess you'd say — maybe more true to what the band sounds like live, like a trio. It might be 'cause I didn't really do a lot of overdubs — it's really just guitar, bass and drums. Like I said, I don't know where it's gonna end up, 'cause there's still plenty of opportunity for me to totally fuck this thing up. Nah, I think it's gonna be good; I think people are gonna like it. I play it in my car here and there, and I like it. Like I said, it's just a matter of getting their voices on there — some harmonies — and some percussion. Maybe a couple of little guitar [bits] — maybe I'll double a couple of lines here or there; that sort of thing. But I'm trying to keep it pretty raw, pretty power trio-sounding."