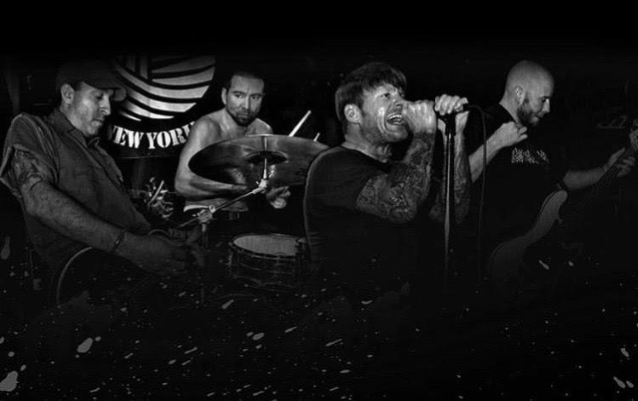 There Are Now Officially Two Different Versions Of CRO-MAGS

CRO-MAGS members John Joseph and Mackie Jayson have reached an agreement with their former bandmate Harley Flanagan over the rights to the group's name. Going forward, Joseph and Jayson will perform as CRO-MAGS JM while Flanagan will get to use the CRO-MAGS name for his own version of the band.

The news of the settlement was broken earlier today (Monday, April 22) on the Facebook page controlled by Joseph and Jayson. They wrote: "As all of our loyal fans and supporters know, John Joseph, Mackie Jayson, A.J. Novello and Craig Setari have been performing as the 'CRO-MAGS' for many years. Due to recent litigation involving Harley Flanagan, John Joseph and Mackie Jayson, we have all agreed that for the benefit of our fans and supporters we want to make sure that everyone knows who it is they are coming out to see. Therefore we have reached a settlement designed to avoid any further confusion. The lead singer and drummer on 'Age Of Quarrel', John & Mackie, along with A.J. and Craig, going forward will perform under the name CRO-MAGS 'JM' which we have a legal right to use. The 'JM' stands for John/Mackie. Of course, we need some time to make this change. There will be a three-month transition where our shows may still be advertised as CRO-MAGS and Harley will also be performing as CRO-MAGS. During this transition period, to confirm which band you want to see, please check on our websites or social media pages. As of August 1, 2019, all shows under the CRO-MAGS 'JM' name will feature us, and all shows under the CRO-MAGS name (on its own) will feature Harley.

"Thanks for your patience as we wrap this up. Now that this is all said and done, we will be working on a new studio album, while continuing to deliver the live performances our fans have come to know and love over the years. A win/win situation.

"See you out there on the road."

A video message from Flanagan regarding the settlement can be seen below.

A year ago, Flanagan, who founded the CRO-MAGS at the age of 14 and toured with the band for some 20 years, sued members of the group for allegedly using the CRO-MAGS name without his permission.

Claiming that CRO-MAGS was his idea when he formed it back in 1981, Flanagan filed a lawsuit against the current lineup of the group — including Joseph — in part for copyright infringement, saying he trademarked the "Cro-Mag" name for recording in 2010 and for merchandise in 2009 and then again in 2017.

According to the New York Post, Harley claimed in the lawsuit that the other members of the CRO-MAGS took over the band around 2002 when "Flanagan's first son was about to be born… and Flanagan had to stop touring to help with the baby."

In July 2012, Flanagan was arrested in New York City on charges of attacking several members of the CRO-MAGS during the CBGB Festival. Flanagan, who had been a panelist at one of the event's seminars, allegedly attempted to attend the concert of his former band.

At the time, Joseph told the New York Post he and Flanagan started the band together in the early '80s, but Flanagan continually took all the credit for himself. Joseph claimed the situation got so bad, Flanagan pocketed every cent from their 1986 tour. "That caused me to lose my apartment and be homeless in 1987," John said. "I lived hand to mouth."

In a separate interview with The New York Times, Joseph said that Flanagan "has been a negative thorn in the side of this band forever."

Less than three years ago, Harley told Straight & Alert that he "would love to make peace with all" of his former bandmates in the CRO-MAGS. "But I don't think they are ready or able yet," he said. "But I would do it. I have put it out there and I want that to be known. But in all honesty, I really care less and less about it every day. I would do a show, to make the fans happy. I'd record a album, 'cause I think we could do a great one and I think it's a shame that we only ever recorded the one record, 'The Age Of Quarrel', as a group. I would be happy to share the stage with them one last time. But, honestly, none of them are people I really want in my life at this point. I am in a great place in my life and I don't really want to bring any negativity or any of those guys back into my life. A show would be great, and for the fans I would do it. A record would be great. I write songs every day; that's never a problem. And I would even love to play with them, all of them again, even if it was just in a rehearsal studio together in front of no one just to do it. But it's all good. I'm not holding my breath."