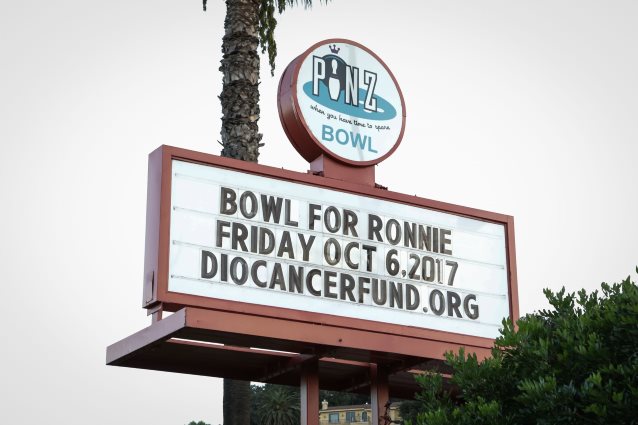 The third annual "Bowl For Ronnie" celebrity bowling tournament, benefiting the Ronnie James Dio Stand Up And Shout Cancer Fund, took place on Friday, October 6 at Pinz bowling center in Studio City, California. This year's event brought in $49,000 for the Dio Cancer Fund, now in its eighth year of raising awareness and much-needed funding for cancer research. It was attended by a capacity crowd of over three hundred rockers, bowling enthusiasts, DIO fans and Dio Cancer Fund supporters, with tickets selling out the day before causing the building to be filled to capacity.

The celebrity team capturing first place this year was sponsored by Round Hill Music Publishing and captained by Marc Ferrari, comprising musicians Rock Feinstein, Fred Coury and Jeff Scott Soto as well as music attorney Mark Abbatista and Tami Lester of Round Hill. Second place in the celebrity category went to the team comprising Chris Latham, Calico Cooper, Chris Hager, Phil Demmel, who brought his own clear bowling ball complete with a skull inside, Bob Kulick and Roy Z.

First place in the corporate team category went to Rhino Entertainment for the second year in a row. Zappa Entertainment placed second and Metal Blade Records came in third.

Also for the second year in a row, the Dean Schachtel Award — named for the late Dio Cancer Fund board member — for the highest overall bowling score went to Dio Cancer Fund supporter Scott Courtright.

Musician Rock Feinstein, who is Ronnie James Dio's cousin and has now played on the winning celebrity bowling team two years in a row, came in from his home in Cortland, New York to participate. He will head up the new East Coast chapter of the Ronnie James Dio Stand Up And Shout Cancer Fund and will be planning sister bowling and motorcycle events in 2018 to raise money for the charity.

Jeff Scott Soto, who also played on the winning celebrity team for two years in a row, commented about the event: "It's an absolute honor and privilege to be invited three years in a row to honor the late great Ronnie James Dio, the incredible cause and do it surrounded by peers and fans alike! Always an incredible evening of laughs, love and bowling. I hope to be involved every year as I love and support this cause with every fiber of my being!!"

A check for $25,000 was presented to representatives of Dr. David Wong's research team from the Dental Research Institute at the University of California, Los Angeles where they are developing a non-invasive saliva test for early cancer detection. This brings the total presented to Dr. Wong's project by the Dio Cancer Fund to $100,000. Dio Cancer Fund medical director Dr. Sandeep Kapoor announced that the project will be publishing a new study in March which will contain an acknowledgement of the Dio Cancer Fund's support for its research. Dr. Wong believes this simple test will receive FDA approval and become available for medical use within the next two years.

Check out a "Bowl For Ronnie" photo gallery below (click on each picture to enlarge).