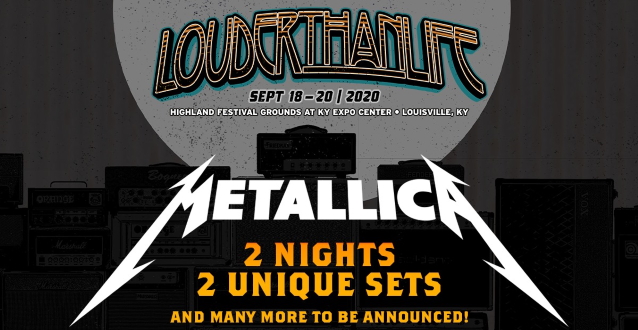 This Year's LOUDER THAN LIFE Festival Is Officially Canceled

This year's Louder Than Life festival, which was scheduled to take place in September in Louisville, Kentucky, has been officially canceled due to the COVID-19 pandemic.

"Even though the festivals are not until September, the advanced planning realities of producing three back-to-back-to-back events have necessitated that a decision be made sooner than later. Our decision also conforms with the advice of health officials," Chamie McCurry, chief marketing officer of longtime concert promoter Danny Wimmer Presents, said in a press release.

According to the press release, ticket buyers will receive refunds for their purchase, and Danny Wimmer Presents will be sending out an email with options and procedures next week.

Earlier in the year, Danny Wimmer Presents announced that Louder Than Life would expand to four days instead of three, with METALLICA as an additional headliner. Other headliners this year included TOOL and RED HOT CHILI PEPPERS.

"We are truly heartbroken it has come to this," McCurry added in the press release. "We want to thank you for your patience, support and loyalty. We hope you are staying safe as well as physically and mentally well. We are blessed to have such an amazing Festival Family, and together, as a community, we will get through this."