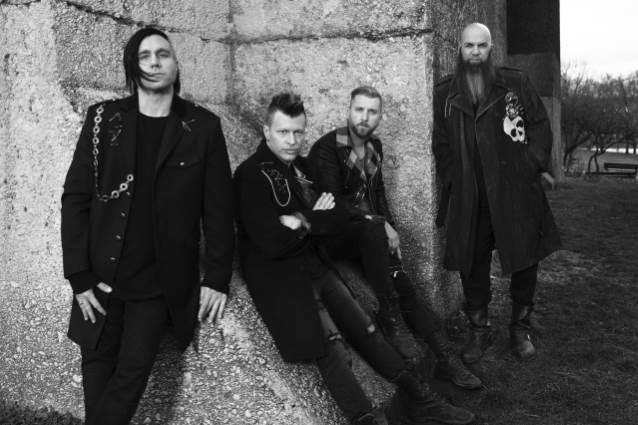 The official lyric video for "Infra-Red", the new single from THREE DAYS GRACE, can be seen below. The track is taken from the band's sixth studio effort, "Outsider", which was released in March

THREE DAYS GRACE made chart history in March, earning the band's 13th No. 1 single on the Billboard Mainstream Rock Songs chart with "The Mountain". That tied the record held for the past two decades by rock legends VAN HALEN.

THREE DAYS GRACE already held the record for most No. 1 singles at Active Rock radio, also with 13. The quartet's previous chart-toppers on the airwaves were "I Am Machine" and "Painkiller" from the 2015 album "Human".

Drummer Neil Sanderson said a while back why he thinks the band continues to connect with listeners. "One thing that hasn't changed with us is that we write about real things in our lives and the lives of people around us, and observations of just sort of life itself, you know," he explained. "And I think THREE DAYS GRACE fans have attached themselves to that and I think that sometimes, you know, that's a powerful thing if you can put into words what other people are thinking."

The Canadian act also consistently averages 3.9 million monthly listeners on Spotify, remaining one of the most listened-to rock bands in the world.

THREE DAYS GRACE will tour North America this summer with AVENGED SEVENFOLD and PROPHETS OF RAGE, kicking off on July 22 in Mansfield, Massachusetts.