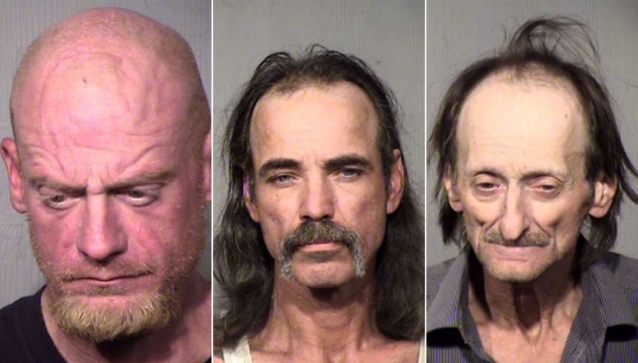 According to CBS 5, three men have been arrested for allegedly stealing guitars from LAMB OF GOD while the band was in Phoenix earlier this month.

The three guitars were stolen from the group's trailer on Thursday, May 2, between midnight and 4:30 a.m., according to Sgt. Vince Lewis of the Phoenix Police Department. LAMB OF GOD was in town to perform at Phoenix's Ak-Chin Pavilion as the support act for SLAYER.

Lewis said: "Someone entered the trailer where musical equipment belonging to a band was being held and removed three unique and valuable guitars. Phoenix Police detectives located one of the guitars for sale on an online app. Another suspect attempted to pawn one of the guitars, but was turned away. Through the course of the investigation, detectives identified and located three suspects."

62-year-old William Widener and 51-year-old Michael Blakeslee were arrested on Wednesday, May 8 in Mesa. 34-year-old Justin Petersen was arrested the following day. All three were booked on theft and trafficking in stolen property charges.

"All three guitars are still outstanding and this portion of the investigation is ongoing," Lewis said.

On May 5, LAMB OF GOD guitarist Willie Adler's "Warbird" guitar had reportedly been offered up on OfferUp by someone calling themselves "Clash With." After exchanging a few notes with a potential buyer, the seller changed his profile photo and was no longer responding to inquiries. OfferUp lets users buy and sell directly without giving out their personal information.

LAMB OF GOD singer Randy Blythe weighed in on the suspected thieves in the comments sections below HATEBREED frontman Jamey Jasta's Instagram post about the arrests. He wrote: "Well, I must say that their, ahem, 'aesthetic' doesn't really surprise me- just kinda makes me sad. But on the 100% serious tip- these men are innocent until proven guilty, & I hope they are given due process and a fair trial. Then, whatever happens after, I hope they get some help. That one Alfalfa looking dude needs a sandwich, about a week's worth of sleep, and a multivitamin. Jesus. #drugskill #dontdodrugskids"

LAMB OF GOD's current North American tour with SLAYER kicked off in Phoenix and will culminate at the Xfinity Center in Mansfield, Massachusetts on May 25. 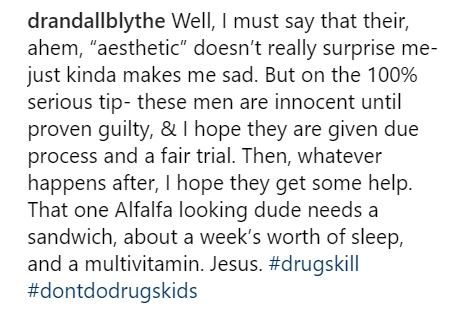 It’s sad to see America’s young people so full of promise get mixed up with the law like this. 🤷‍♂️ https://t.co/F1R5PFALbJ