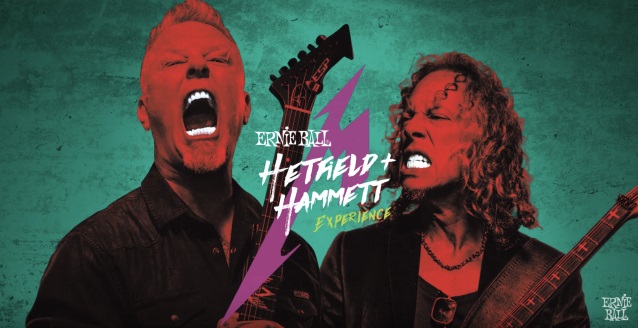 Ernie Ball and METALLICA have announced the winners of the "Hetfield + Hammett Experience" contest. The three grand prize winners won a trip to meet James Hetfield and Kirk Hammett at the METALLICA HQ, the bandmembers' inner sanctum in San Rafael, California where they record, write, and houses memorabilia from their 30-plus years of touring worldwide.

Trevor, Kim, and Anthony had the opportunity to pick the metal masters' brains, hear stories from the road, and learn invaluable lessons about their music gear, playing techniques, and even personal stories with an exclusive question-and-answer session. Check out all of the behind-the-scenes footage below.

Make sure to sign up for the e-mail list to be the first to know about additional chances to win exclusive prize packages like the "Hetfield + Hammett Experience" from Ernie Ball.

METALLICA just completed a 24-date European tour and is next scheduled to hit the road at the end of the summer for the 2018-2019 North American leg of of its "WorldWired" tour.