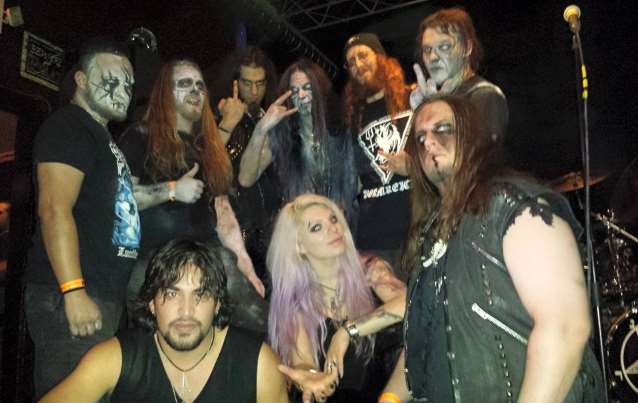 **UPDATE #3**: A Facebook statement from WORMREICH founder, vocalist/guitarist Christopher Earl Pyle (a.k.a. Vulk),reads as follows: "This morning I lost my brother and best friend, along with two awesome people that I was lucky to have even known for a short while. Two of my other brothers remain in critical condition. Somehow I was spared with only superficial wounds and a dislocated shoulder.

"This is not the end of WORMREICH. It's always been my vision, but more importantly, it is for those whom I have lost today that it MUST continue.

"Please send healing energy to the members of WORMREICH, KHAOTIKA and their families. Ave."

Nicholas R. Crisostomo, 25, of Round Hill, Virginia; Ian A. McKinney, 30, of Madison, Tennessee; and Paul. J. Truesdell, 29, of Mableton, Georgia, were killed at the scene of the crash, according to The Atlanta Journal-Constitution.

McKinney and Truesdell were members of the Huntsville-based WORMREICH. Crisostomo was a member of the Atlanta-based KHAOTIKA.

**UPDATE #1**: Rick Hayes, the husband of KHAOTIKA singer Lariyah Hayes, has posted the following message on Facebook: "I want to let everyone know that Lariyah was involved in the accident this morning, and yes she has some injuries, but she is strong, and is going to be okay, they are not life threatening.

"Prepping her for surgery now, and will update everyone as soon as I can.

"The full extent of the accident is still unknown to me as of now, details are still coming in on everyone involved, from both bands.

"Thank you everyone, for your wishes and your support in our moment of tragedy."

According to The Atlanta Journal-Constitution, there people were killed Monday morning when when a van carrying members of two heavy metal bands — Atlanta, Georgia-based KHAOTIKA and the Huntsville, Alabama-based WORMREICH — crashed in northeast Georgia.

The accident happened about 7 a.m. on I-85 southbound near Maysville Road in Jackson County, about 65 miles northeast of Atlanta, while the two bands were heading to Atlanta for a Monday night show after finishing a Sunday show in Spartanburg, South Carolina.

The van's driver "apparently fell asleep and allowed the vehicle to leave the roadway, at which time the vehicle struck a tree on the passenger side," Georgia State Patrol Cpl. Scott Smith told The Atlanta Journal-Constitution.

Three people were ejected and later died. Eight other people were taken to local hospitals, three in critical condition.

Authorities have not released the names of those killed and injured in the crash.

Another band that had been on the short tour with WORMREICH and KHAOTIKA, KULT OV AZAZEL, released a statement on Facebook about the crash.

"Unfortunately tonight's show in Atlanta, GA will be canceled," the statement reads. "The van carrying WORMREICH and KHAOTIKA was in a horrible accident this morning. We cannot go into details due to respect to the families of the involved and we are sure details will soon be available through the other parties when the time is right. Our thoughts are with those involved and their families."

WORMREICH is a black metal band which has released one full-length album, 2011's "Edictvm DCLXVI", and an EP, 2014's "Wormcult Revelations".

KHAOTIKA is a melodic black act that released its debut EP, "Bloodline Empire", in 2014. 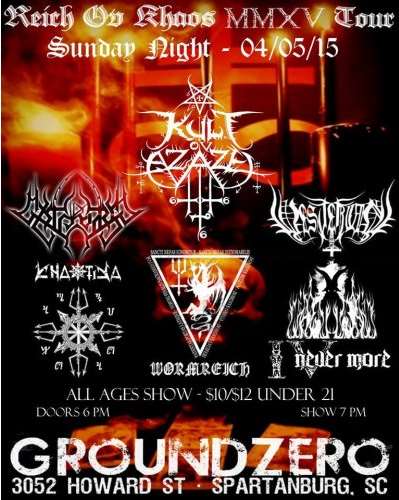