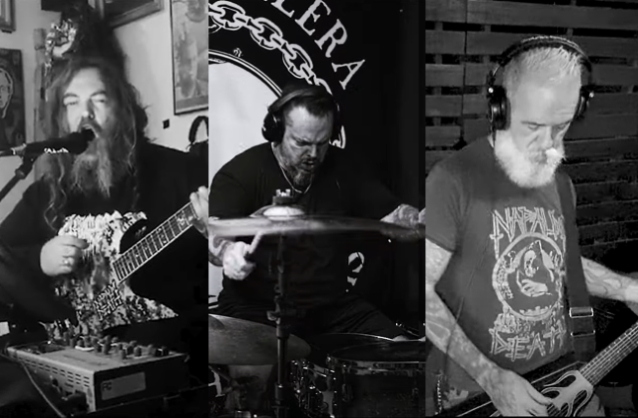 Former SEPULTURA members Igor Cavalera (drums),Max Cavalera (guitar, vocals) and Jairo Guedz (guitar) reunited virtually to record a new version of the band's classic song "Antichrist", which originally appeared on the 1985 EP "Bestial Devastation". The resulting clip was uploaded to YouTube as part of Igor's recently launched a new video series, "Beneath The Drums", where he dissects some of the best-known songs from his recording history.

Speaking about "Antichrist", Igor said (as transcribed by BLABBERMOUTH.NET): "'Antichrist' is probably one of the first tracks that I ever wrote something on the drums. And as far as I remember, we wrote [it], me and Max, in our bedroom. And we were very influenced by a lot of really cool bands back in '84, '85, and those bands were VENOM [and] HELLHAMMER, and then some German bands later, like KREATOR and DESTRUCTION. So, 'Antichrist', it was one of those tunes where we had an idea of what we wanted to do — very influenced by black and death metal.

"Back in 1984, my drum set was not really a drum set; it was just some pieces of percussion that I collected at the time that my parents gave me," he explained. "So I had a snare and a floor tom. So, our rehearsals back then, I didn't have kick drums at the time, so I was only playing with my hands, doing all the beats between the two instruments, and then a crash, which was attached to a broom stick with a nail on it. So it was very primitive. And I remember by the time we went into the studio to record 'Bestial Devastation', I had to adapt some of those beats to a proper drum set, with kick drums, with toms and things like that, even a hi-hat. But then 'Antichrist' is one of those tracks where I still remained some of the very primal way of playing it, with just a floor tom and a snare, so it's almost like a pre-blast-beat version that I was doing."

SEPULTURA was formed in 1984 in Belo Horizonte, the capital city of Minas Gerais. Jairo joined the group the following year and played on the band's first two releases, "Beastial Devastation" and the 1986 full-length debut, "Morbid Visions".

After Max exited SEPULTURA, there was a rift between him and Igor, one that was eventually repaired through the redemptive power of music. Some time had passed and Max and Igor were unable to resist the musical pull in their magnetic fields and their musical collaboration was renewed. The duo returned with CAVALERA CONSPIRACY, which released its debut album, "Inflikted", in 2008, a follow-up effort, Blunt Force Trauma", in 2011, "Pandemomium" in 2014 and "Psychosis" in 2017.

Max and Igor played together for the first time in 10 years at the tenth annual D-Low Memorial Festival in August 2006 at the Marquee Theatre in Tempe, Arizona.