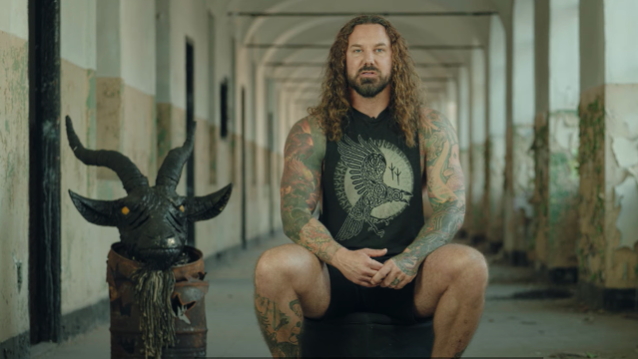 TIM LAMBESIS: AS I LAY DYING Hopes To Have New Album Out In 2023

AS I LAY DYING has just completed the U.S. and European legs of its 2022 tour. The trek marked the band's first with its new touring lineup, featuring founding vocalist Tim Lambesis and longtime guitarist Phil Sgrosso alongside drummer Nick Pierce (ex-UNEARTH),bassist vocalist Ryan Neff (MISS MAY I) and guitarist Ken Susi (UNEARTH).

In a new interview with Metalshop TV, Lambesis stated about AS I LAY DYING's recent lineup changes (as transcribed by BLABBERMOUTH.NET): "I think for our fans, they think that the changes happened all in a very short period of time, but they actually happened over the last two years. The first change was on guitar we invited Ken Susi to fill in for us. And that was about two years ago that we invited him. But then, of course, the pandemic happened and so we had a lot of breaks until we had a tour again. So Ken's been rehearsing with us, or talking about rehearsing with us, for the last couple of years. And on drums we have Nick Pierce, who joined us. Nick Pierce was previously in UNEARTH; Ken is from UNEARTH as well. And Nick stopped playing with UNEARTH and coincidentally at the same time we needed a drummer, because our previous drummer hadn't been communicating with us; he went very isolated once the pandemic hit. And so there wasn't an argument or anything like that; it was just a situation where when the pandemic hit, he decided to take a new direction in life and kind of cut himself off from the rest of us. And we decided we wanted to keep going forward. Phil and I had been the ones writing the songs all these years, so when Nick Pierce left UNEARTH, we thought it was the perfect opportunity to have him perform with us. And then Ryan came from MISS MAY I. He was the last guy to come in. And he didn't come in until a couple of months ago. Our bass player, Josh, previously left, and he's with SPIRITBOX now. And when he decided to go perform with SPIRITBOX, we called up Ryan, who was with MISS MAY I. And Ryan Neff was on tour at the time. And then we asked him, 'Can you start touring with us as soon as this tour is over?' And he said, 'Well, I'm only gonna have three days off to rehearse in between tours.' He said, 'If you guys want me to do it, I'll make sure I come prepared.' And he had a lot to learn in three days, but he pulled it together. He's a very, very hard-working guy."

Lambesis also talked about AS I LAY DYING's plans for a new studio album as a follow-up to "Shaped By Fire", which came out in September 2019 via Nuclear Blast.

"Well, we have demos going back and forth between Phil and I," he said. "The two of us have been writing songs for 20 years, and so we have a very, I guess, refined method of writing where we exchange demos early on so that they have room to be pulled apart. And then once there's a full instrumental, then I start writing lyrics. And I typically don't write lyrics until after we have all the instrumentals together. So pretty shortly after this tour we'll finish the demo process and then I can start writing lyrics. And hopefully by the end of the year we'll finish recording so we can have an album next year."

This past June, longtime AS I LAY DYING drummer Jordan Mancino announced that he would sit out the band's tour due to "a number of ongoing internal issues" that "have not yet been resolved."

Mancino's announcement came less than a month after AS I LAY DYING's longtime bassist/vocalist Josh Gilbert revealed that he was leaving the band. In a statement, the remaining members of AS I LAY DYING said that Gilbert "decided to exit" the group "to pursue other musical opportunities."

Josh was the second AS I LAY DYING member to leave the band in less than a year. In August 2021, guitarist Nick Hipa confirmed his exit from AS I LAY DYING, explaining that he could no longer justify being part of "a superficial pursuit" of the "story and meaning" that the band's 2018 reunion was built upon.

In September 2021, AS I LAY DYING released a new song called "Roots Below" which was originally a B-side leftover from when the sessions for "Shaped By Fire".