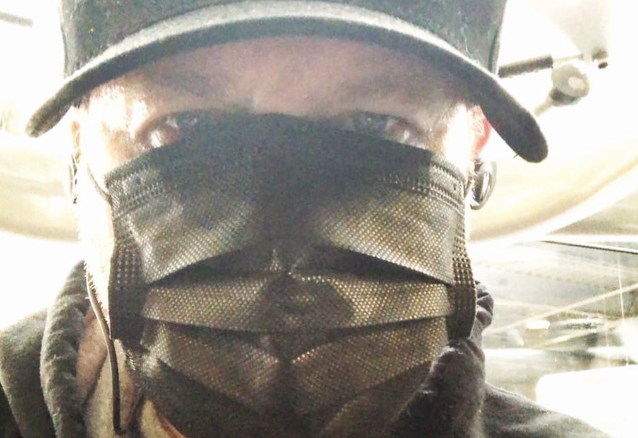 In a new interview with "On The Road To Rock", former JUDAS PRIEST singer Tim "Ripper" Owens spoke about how he adapted to strict COVID-related rules and regulations during the coronavirus crisis. He said (as transcribed by BLABBERMOUTH.NET): "Listen, it is what it is, whatever you think about it. My girlfriend [went to] New York for two months [as a paramedic] and worked when COVID first started, and she's never seen anything like it. So she's experienced this firsthand. But you know what it is? My thing was this: let's just get through it; let's do whatever we have to do to get through it.

"I'm not a snowflake who… I don't wanna wear a mask, and whether they work or not, I got COVID before," the 53-year-vocalist, who lives in Akron, Ohio, continued. "But I'm not a whiner that's gonna whine about wearing a mask. It wasn't that difficult. I wasn't a roofer, and I wasn't digging a ditch in a mask. I actually wore my mask the whole time I was in the gym — on the elliptical and the treadmill I wore a mask. Because, first of all, wearing a mask I don't really have to talk to any jackasses half the time either, so they don't recognize me, so that makes it even better."

Owens, who frequently "likes" tweets that amplify Republican talking points and that are derogatory to Democrats, did not reveal exactly when he came down with COVID-19, but he said he did his part in trying to protect others from possible infection.

"I just had the philosophy of I will do whatever I have to do to get us back together," he said. "Whether I believe it, whether I think it's right, whether I think it's wrong, politically — left, right, middle, whatever the hell we're talking about — let's just do whatever we have to do to get it going on. And you know what? Everybody just used common sense. My thing was back then if you are sick, stay home. If you don't wanna wear a mask [or] if you're a masker and you're worried about people without masks, then stay home.

"I miss sports," he continued. "I'm a big sports guy, and music, so my philosophy was whatever we need to do to get us back in the right direction, let's do it… Even now, when the numbers go up… They're gonna go up at times, and then this new strain is gonna hit. It is what it is."

Owens added that he is optimistic about the pandemic situation and the return of live music in the near future.

"Listen, we got hit with something we'd never seen before, and it was a stress situation; you don't know how to handle it," he said. "But you know what? Numbers are gonna go up and down, they'll move around, and you still use common sense. I mean, I'm not gonna go to the grocery store and lick the back of somebody's head. I'm gonna stay six feet from 'em and not be around somebody who's coughing. It's just common sense stuff. You do what you've gotta do. But I think we're there now. I think we're in a better position where you feel a lot safer going out there now."

In the past, Tim had vowed to get vaccinated against COVID-19 as soon as he was able to.

29 percent of Republicans have said they won't get vaccinated, while only 5 percent of Democrats feel the same way.

According to a recent study released by personal finance website WalletHub, Ohio's economy was the state hit fourth most by the COVID-19 pandemic.

KK'S PRIEST's debut album, "Sermons Of The Sinner", will be released on August 20 via Explorer1 Music Group/EX1 Records.