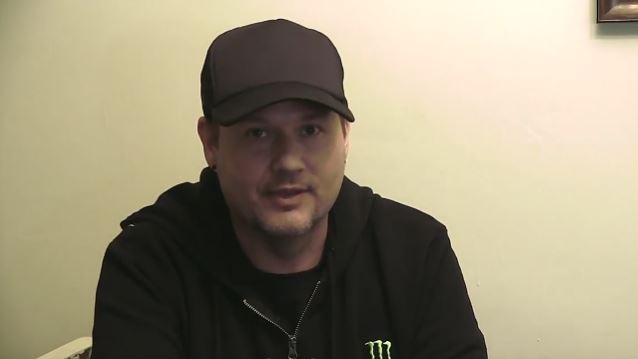 On whether he thinks doing a third studio album with JUDAS PRIEST would have solidified his status in the band:

Owens: "I don't know. One of the problems was when I joined JUDAS PRIEST, it was probably the worst time in hard rock and heavy metal there was, I mean, 1996, '97…. I joined in '96, and it was just a horrible time, so it doesn't even matter. Rob [Halford] wasn't selling, no one was selling, bands disappeared…. You know what I mean? So I don't know if it would have solidified it. I mean, what happened is exactly what should have happened. I mean, Rob needed to come back to JUDAS PRIEST; for himself, he needed to come back to JUDAS PRIEST. JUDAS PRIEST needed to have Rob come back. And I needed to go out and do other things. Yeah, I'm not known as the singer for JUDAS PRIEST anymore, but I tour more places, I tour the world, I do more shows, financially I make more money, everything's great. I don't know if a third record would have changed it. I mean, it would have been great. Listen, I wouldn't have quit JUDAS PRIEST. I wanted to leave JUDAS PRIEST, 'cause I had already recorded the ICED EARTH record ['The Glorious Burden']. So I wanted out of JUDAS PRIEST, 'cause I wanted to do other stuff, but I never would have quit. 'Cause I was great friends with them, and I was the singer of JUDAS PRIEST. But to make more money and to do more things, I had to branch out and do other things. But I don't know if a third record would have… It would have been great to do it. I mean, what I'd written [for the debut album from] BEYOND FEAR, there were songs on there that I had written while I was in JUDAS PRIEST, like 'Save Me' and 'Scream Machine', songs that I think could have been [suitable for] JUDAS PRIEST."

On whether he would ever rejoin JUDAS PRIEST on stage to sing a few songs from his era of the band:

Owens: "I absolutely would, and the main reason is I'm friends with all of them, including Rob. And the thing I miss the most out of JUDAS PRIEST — it's really the only thing — is the friendship, because we were friends. So I would love to do it. Obviously, they're not playing 'Burn In Hell' or 'Bloodsuckers' or any of these songs, so someone needs to… 'Cathedral Spires', you know… Fortunately for me, when I tour, my last tour I did in the U.K., I did 'Jugulator', 'Bullet Train', 'Dead Meat', 'Death Row', 'Cathedral Spires'… I did a bunch. But it would be great; it's be pretty awesome. I think they were gonna retire — I think it was gonna be it — but I think when K.K. [Downing, guitar] left, that changed the rules. I think they were talking about it, and then he left, and they were able to back out of that and keep touring. I mean, why would you wanna stop?"

Owens's debut solo album, "Play My Game", was released in 2009 via SPV/Steamhammer.