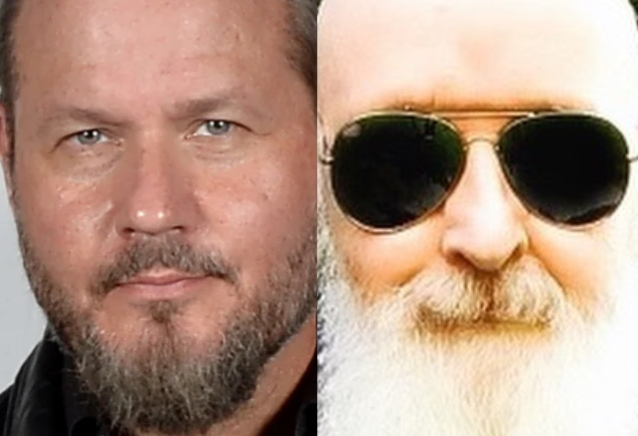 In a brand new interview with Pierre Gutiérrez of Rock Talks, Tim "Ripper" Owens spoke about the fact that JUDAS PRIEST is not performing any songs from the two albums he recorded with the band — 1997's "Jugulator" and 2001's "Demolition" — during the group's recently launched 50th-anniversary tour. "I actually don't think it makes sense that they don't play songs from my era," he said (as transcribed by BLABBERMOUTH.NET). "I mean, it was JUDAS PRIEST. Listen, you're celebrating 50 years of JUDAS PRIEST, but you're leaving out 10 years of it. The thing is Rob [Halford] would sound so awesome… Could you imagine Rob singing 'Burn In Hell'? Holy crap, it would sound fantastic. So, there's nothing wrong with sticking 'Burn In Hell' in a setlist. It was right in the middle there, so… I don't know. But they have a great setlist to play right now, so it's pretty awesome to see it.

"It's amazing JUDAS PRIEST has never done it," Owens continued. "They don't always have to do it, but it's amazing that they've never done it. I mean, Rob supposedly has never heard my era of JUDAS PRIEST, and it's kind of all right because I've never actually listened to his solo stuff except FIGHT, so we're kind of even on it. After FIGHT, I've not really listened to his stuff either, so it's kind of all right.

"I love Rob — Rob is a friend and a mentor and an idol. Rob Halford and Ronnie James Dio are the two guys that really inspired me. So it's nothing against anything, really. It's not that I didn't want to [listen to his solo stuff]; I just never did. It was kind of, like, 'I'm in JUDAS PRIEST. There's no need.' But after I left, I listened to the JUDAS PRIEST records. Whether I liked them or not, I listened to 'em."

Last month, Rob was asked by Classic Rock magazine if he has listened to "Demolition" and "Jugulator". "No. I still haven't," he said. "This might sound selfish, but because it's not me singing, I'm not attracted to it. I sound like a twat, but I'm really just not interested. And that's no disrespect to Ripper, 'cause he's a friend of mine."

In October 2020, Halford told "The SDR Show" that he would "absolutely" be open to performing material from "Demolition" and "Jugulator" with PRIEST. "Those two albums are just as valid as everything else in the PRIEST catalog," he explained. "So who knows? That day may yet come."

"Demolition" and "Jugulator" are included on "50 Heavy Metal Years Of Music", JUDAS PRIEST's upcoming limited-edition box set which will contain every official live and studio album to date plus 13 unreleased discs. Released on October 15, it is the most extensive release of previously unreleased music the band has made from its vast archives.