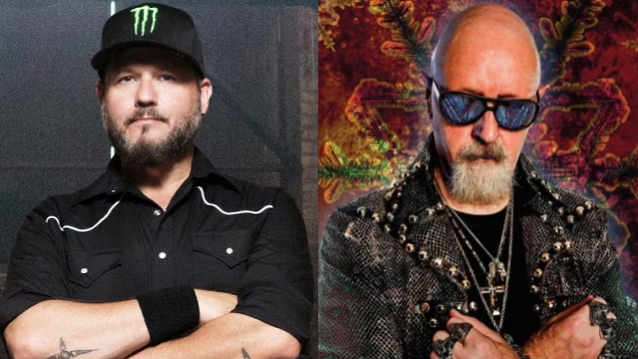 Former JUDAS PRIEST singer Tim "Ripper" Owens says that he would love to record a duet with the band's longstanding frontman Rob Halford.

Owens joined PRIEST in 1996 after being discovered when the band's drummer was given a videotape of him performing with the PRIEST cover band BRITISH STEEL. JUDAS PRIEST at the time was seeking a replacement for Halford, who has since rejoined the band.

In a brand new interview with the "Ouch, You're On My Hair" podcast, Owens was asked if there has ever been any talk of him collaborating with Halford on a new project. He responded (hear audio below): "We've never talked about it, which would be pretty awesome. Rob and I are friends, and it's great… I would love to do something with Rob, and I've always thought about it, and I think the fans would love it. Even if we do a song or two.

"Somebody laughed when I said this, but for the last 15 years, I've always said, man, I would love to do the song 'Under Pressure' [the 1981 QUEEN hit co-written by and featuring David Bowie] with Rob. It would be a great over. And it's funny, 'cause [that song features] two of my favorite singers, Freddie [Mercury] and especially David Bowie — I absolutely love David Bowie — and for Rob and I to do it, I think it would be an amazing thing.

Addressing Halford's recent comment that he is "up for" performing songs written and recorded during the years when PRIEST was fronted by Owens, Tim said: "I would love to hear PRIEST [perform some of the songs I recorded with the band]. Listen, their 50-year celebration [in 2020], you just can't ignore the almost 10 years I was actually in the band. I know they have kind of ignored it, and I understand why, but at this point, it would be cool to throw in a 'Burn In Hell'. The songs that I sang Rob would sing so good, and it would be really awesome to hear; 'Burn In Hell' would be a perfect one for him to do."

This past October, JUDAS PRIEST guitarist Richie Faulkner said that "Hell Is Home" is one of his favorite songs from the Owens era.