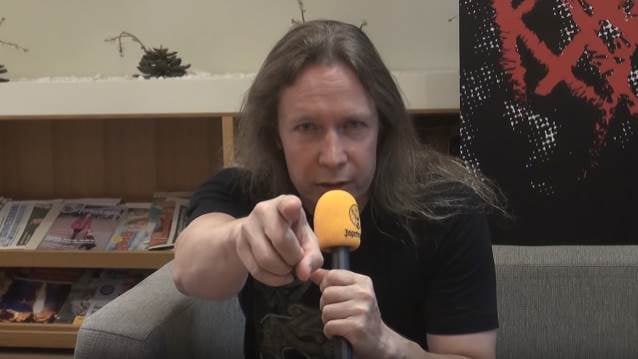 Kaaos TV conducted an interview with frontman Timo Kotipelto of Finnish/Swedish melodic metallers STRATOVARIUS prior to their July 21 performance at John Smith Rock Festival in Laukaa, Finland. You can watch the entire chat below. A few excerpts follow (transcribed by BLABBERMOUTH.NET).

On the differences in performing live as an acoustic duo with ex-SONATA ARCTICA guitarist Jani Liimatainen versus STRATOVARIUS:

Timo: "[There] are a lot. In a band, you have five guys, a lot of noise coming from the stage. When we go as a duo, it's only two guys, one guitar, and two vocals and nothing else. The first rows are sometimes within reach; just there. Basically, you hear everything, what the people are talking about and if they're asking us for some songs, then we can communicate. It's totally different. In a way, it's more relaxing. Then again, on the other hand, it's more demanding, because, well, we always make a lot of fuck-ups and that's 'part of the show,' as we say. [Laughs] You're kind of naked onstage. But, that's the way it is. There's not so many instruments. There's a lot of free space to fill, but then again, we are not trying to fill all of the empty [guitar] cabs, so we let the acoustic songs breathe. On the other hand, when we're playing acoustic songs, the melodies, they come up to the surface. If the melody in the song is good, then you could play it acoustically much easier as opposed to being complicated rhythm-wise, [where] it's very difficult to make it an acoustic version."

On whether he's learned anything from performing STRATOVARIUS songs acoustically:

Timo: "Definitely. Not only as a composer, but especially in my case as a singer, these acoustic shows, they brought a lot of new colors to my voice. Because it's a different approach. Even the songs are the same, but the versions are completely different very often. But, it's also funny because two days ago, we played two shows in Tampere with both [STRATOVARIUS guitarist] Matias Kupiainen and Jani Liimatainen and we had these acoustic versions and some of the songs they had a solo part, but when we play as a duo, there's no solos. So, in a couple of hours I'm going to hit the stage with STRATOVARIUS, the same songs and let's see what my mind will tell me if there's going to be a solo part because it really fucks you up. Even though the versions are different and you know you are playing an acoustic show or tonight, in this case, a band show, but then my mind is sometimes telling me, 'Okay, there's no solo.' On the other hand, 'Okay, now there's a solo part.' Then there's nothing. It's difficult to tell. You learn something, but then it's a different environment and you're like, 'What's going to happen?' But, we'll see. It's going to be fun."

On STRATOVARIUS's future studio album plans, including an already-recorded stopgap release due this fall:

Timo: "The situation is quite good. My parts are done. I'm not going to sing anything for that album. It's going to be kind of, it's going to be called 'Intermission Part II'. Maybe there's a sub-title; I don't know yet. The record label was asking that maybe because we've been a bit lazy or a bit busy, it depends on how you see it, we haven't been able to do the full album. We have this tour coming up in October with TARJA. They were asking, 'Could you please do something?' Then, I think Jens [Johansson, keyboards] promised them, 'Okay, we can do this special album.' It is special. There are three completely new songs. Then there's four songs as an acoustic orchestra version, but the guys are playing acoustic instruments and so on. Then, I'm not sure if the label will want to put on some live material. We have plenty of stuff, but, at least the three songs that I heard that are already mixed, they sound very nice. So, that's the plan."

On what STRATOVARIUS has in store after their fall European tour with TARJA:

Timo: "The plan is actually to start composing. We have already some songs, which are not on this album, but some ideas. So, I think the plan, at least, for Matias and I, we're going to start composing probably within two weeks or one week. Maybe he's already composing in his hotel room, I don't know. But, the plan is that we are composing because it takes some time. Hopefully, I'm hoping that by the end of the year, we'll have the songs ready. But, then can we start recording this year or early next year? That's still open. But, the new album has to be out next year. We are planning that it might take three months or four months. It depends on the whole process. That might be from January to end of February. Then, maybe if we're lucky, we can put out one new song before the summer and do summer festivals and hopefully the album will be out next autumn, in one year, not this autumn. That's the plan. It takes more. It's much more difficult the more albums you've done. It's more complicated and it takes more time."

STRATOVARIUS's most recent studio album, "Eternal", was released in 2015 via earMusic.