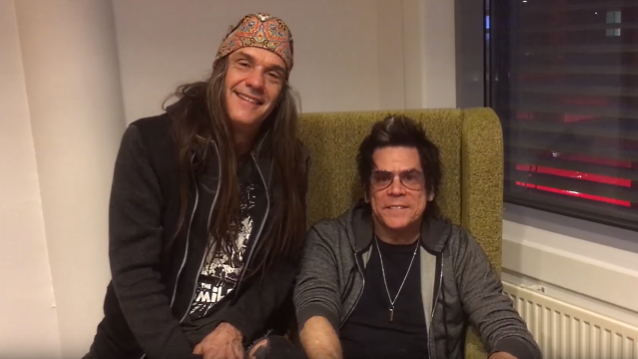 TNT's Ronni Le Tekrø was interviewed for episode 6 of the "80's Glam Metalcast". Asked if he is still on good terms with the band's former singer Tony Harnell, the guitarist said (hear audio below): "Definitely. We talk regularly and we're even discussing making a kind of Page/Plant album, a Harnell/Le Tekrø album, which could maybe lead into something in the future. But I think me and Tony Harnell — I'm speaking not on behalf of him, but on behalf of myself — we need a different playground to do more extensive hard rock with other ideas, whereas TNT is more limited to a [specific] sound. You see what I mean? So, we're definitely buddies, and that will last forever. We don't hate each other, and we never did. That was never the [case]."

Harnell said that he "really, really wanted" his latest collaboration with TNT to work out. "In my opinion, this was gonna be it — we were gonna stay together until I didn't feel like singing anymore," he said. 'I was gonna do other things and do other projects and so forth, but my goal was that TNT woud be my band for at least another five years, maybe 10 years or whatever, until it ran its course. So this was kind of an unexpected thing."

Harnell also wanted "to make clear" that he "did not quit" TNT at the end of his latest tenure with the group. "I really haven't quit the band as many times as other people in the band have said and also the press has said," he explained. "Most of the time, it's been either a mutual parting of ways or a break. We've taken several breaks that were just not even talked about — we just didn't record or work [together] for a couple of years and then just started working again. The only time I legitimately actually quit the band was 2006. And then this [latest split] was just sort of a, 'This isn't working.' It was kind of a mutual thing. It [was] working on stage really well — actually, some of the best shows we have ever done were [in 2017]. And I was actually really happy. In August [2017], I thought we did some of the best shows we've ever done, and then at the same time, we could not get the business stuff together. And at our age, the business really does have to be organized."

In November 2017, TNT recruited Baol Bardot Bulsara as the band's new singer. The Spanish vocalist made his live debut with TNT at the Oslo Spektrum on Oslo, Norway, where the group performed as the support act for the SCORPIONS.