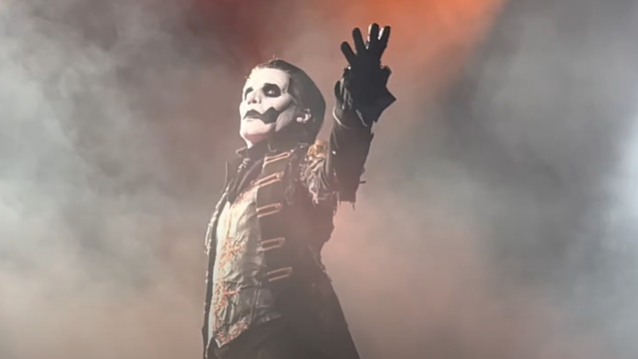 TOBIAS FORGE Says Online Hate Against GHOST Is A 'Good Thing': It All 'Adds To The Activity'

In a new interview with "Elliot In The Morning", GHOST leader Tobias Forge was asked if he gets angry at times or if it makes him laugh at times when people try to figure out exactly what little area to put his band into. Tobias responded (as transcribed by BLABBERMOUTH.NET): "No, definitely not angry. That is not my problem, really. I don't have a problem with people having a problem with it.

"If I wanna be the most super-positive person ever and just see everything from a half-full perspective, it's, like, a lot of… Most things today [are] measured by activity — Spotify activity, online activity, whatever — as opposed to 30 years ago when it was sales; one record sold was one unit and that was counted," he continued. "But nowadays everything is about content and activity.

"One thing that people — especially those who aren't really chatting about how good they think we are but how bad they think we are, that adds to the activity. So it's actually a good thing. [Laughs] So keep on talking. It's all good. It's all fun."

Earlier this month, GHOST scored its first-ever Top 40 single in the U.K. with the 2019 song "Mary On A Cross" after a TikTok user used a slowed down version of the song to soundtrack a short video about the Netflix show "Stranger Things". Since then, the "Mary On The Cross" hashtag has amassed over one billion TikTok views and the song was used to soundtrack tens of thousands of videos on the platform. GHOST later released the official slowed down version of "Mary On A Cross" with added reverb.