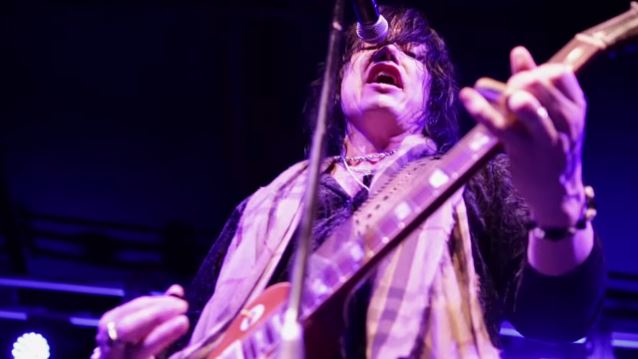 During a brand new interview with Lithium Magazine, CINDERELLA frontman Tom Keifer spoke about what a significant influence late blues guitar legend Johnny Winter was on his musical development.

"I didn't even realize how big he was in my life until the news [of Winter's recent passing] hit me," he said. "I started thinking back, and to be honest, I am still kind of broken up about his passing. He was a huge influence on me — that blues element and the slide guitar and the amount of fire that he had in his playing and singing. And certainly his use of the resonator guitar, the National Steel, was something that he really inspired me to pick up. And the day after he died, I had an epiphany in that as much as I have always named him as an influence and always realized what and influence he was, it kind of dawned on me that he was one of the biggest — if not the biggest — in terms of some of the things that were unique to CINDERELLA like the slide guitars and resonator guitars and the bright fiery tone of the Gibson Firebird [guitar] that I have been playing for years."

The 53-year-old Keifer, who was born and raised in Springfield, Pennsylvania, previously described CINDERELLA's sound as "blues-based hard rock with melodic lyrics that were just about everyday things."

He told Lithium Magazine: "My first exposure to the blues was from the second generation, through Jimmy Page, Robert Plant and all the 1970s rock bands that I listened to, including THE [ROLLING] STONES. I didn't even know what the blues was, I just knew I liked how Jimmy Page played. An older guy that was in my band at the time showed up one day at my house with the album 'B.B. King Live At The Regal', and started playing it. I was 17 or 18 and I remember clearly looking at him and saying, 'This guy sounds like Jimmy Page.' And he just kind of smiled and said, 'No, actually it's the other way around.' And that's when I first realized that my heroes had heroes and influences. So then I started digging back into the blues and that's when I got turned on to Elmore James and Muddy Waters, Albert King, Son House and Robert Johnson. Somewhere in that mix, Johnny Winter appeared too."