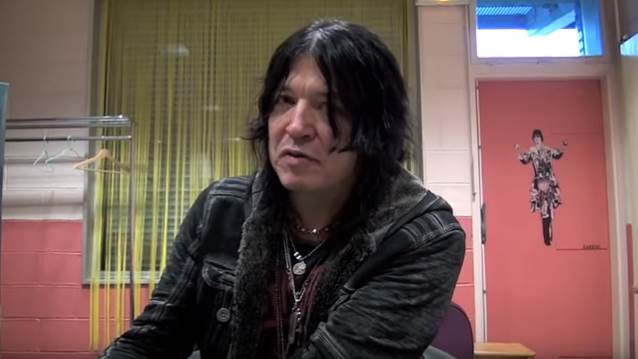 During a brand new interview with RockRevolt Magazine, CINDERELLA frontman Tom Keifer was asked if the band is now officially "done." He responded: "Well, the truth of the matter is, there have been some issues with CINDERELLA, within the ranks of CINDERELLA, for years now… going back decades. They came to a head in 2012. We took some pretty extreme measures to right the ship and fix things, and we made a pact as a band in 2012 that we would not do anything as a band until the issues were resolved. That's how much it came to a head. The issues are unresolved, so that's all I can say about that."

Although CINDERELLA hasn't released a new studio album since 1994's "Still Climbing", the band started playing sporadic shows again in 2010 but has been largely inactive for the last few years while Keifer focuses on his solo career. Earlier this year, CINDERELLA bassist Eric Brittingham told the "Talk Toomey" podcast that he didn't think Keifer was coming back to the band. Eric said: "If [Tom] wants to do a tour [with CINDERELLA], I'm in. I'm glad that I didn't hold my breath. I'd be blue now. [Laughs]."

Keifer and his solo backing band (Tony Higbee on guitars and vocals, Billy Mercer on bass and vocals, Paul Simmons on drums and vocals, Paul Taylor on keyboards and vocals, Savannah Keifer on vocals, percussion and piano, and Kendra Chantelle on vocals and percussion) recently entered a Nashville studio to record with four-time Grammy Award-winning producer/engineer Vance Powell (ELLE KING, CHRIS STAPLETON, JACK WHITE). The new tracks will be featured as bonus material on an expanded, deluxe edition of Tom's solo debut, "The Way Life Goes", set for release later this year. The package will also include the original album that was remastered by Richard Dodd (KINGS OF LEON, JASON ALDEAN, LADY ANTEBELLUM),a bonus DVD with video extras, a documentary about the creation of the bonus tracks, and exclusive interviews with the band filmed during the new recording sessions.