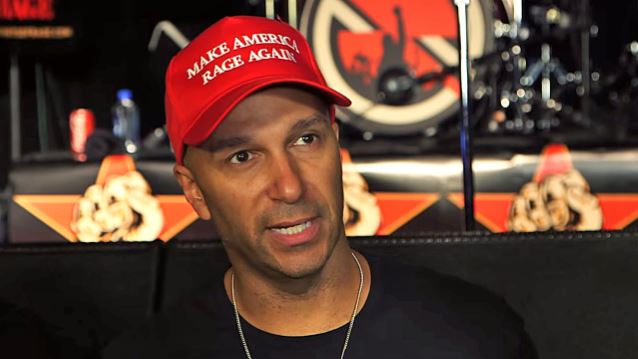 TOM MORELLO On CHRIS CORNELL: 'I Don't Think I'll Ever Recover From His Passing'

Tom Morello spoke to the WRIF radio station about the passing of his AUDIOSLAVE bandmate Chris Cornell.

The SOUNDGARDEN frontman was found dead on May 18 in his Detroit hotel room from suicide. He was 52.

"I don't think I'll ever recover from his passing, but we have so many great memories," Tom said about Chris. "And I was just really glad that I was able to… We played an AUDIOSLAVE show — the first one in twelve years — in January, so to be able to reconnect with him, both as friends and as musical collaborators, that's something I'm so glad we were able to do."

Morello, who guested on LINKIN PARK's 2014 album "The Hunting Party", also talked about the passing of that band's lead singer, Chester Bennington. Bennington died last month in an apparent suicide in his California home. Chester's body was found on what would have been Cornell's 53rd birthday.

"It's insane," Morello said. "It's a horrible loss for the world of music, but also a horrible loss, 'cause they were two… I didn't know Chester as well, but [they were] two really good people. And both seemed very inexplicable, their passing."

Morello said that even though Cornell and Bennington's deaths shocked the entire world, they did raise awareness of mental health, depression, and many other problems that deserve our attention. He stressed the importance of recognizing signs of depression in loved ones and inspiring them to seek professional medical assistance.

"I'm not someone who suffers from depression, so I don't understand it, but you've really gotta… For all you listeners out there, if you do know someone who has addiction issues or depression issues, that's a real thing, and to always make sure that they know you're there for 'em," he said. "We've gotta look after each other."

According to Morello, Cornell showed no outward or public signs when they last interacted that he was feeling anything other than joy.

"I saw Chris in January and we texted a couple of times after that, and he was great," Tom said. "On a scale of one hundred, he was one hundred. He was happy, he's got a beautiful family… We talked about doing more AUDIOSLAVE stuff, maybe even this year. And so it's just a real pity."

Morello's new group PROPHETS OF RAGE, in which he is joined by some of his bandmates from RAGE AGAINST THE MACHINE, as well as members of PUBLIC ENEMY and CYPRESS HILL, will release its self-titled debut album on September 15 via Fantasy Records. The disc was recorded with legendary producer Brendan O'Brien who has done notable work with RAGE AGAINST THE MACHINE and AUDIOSLAVE.