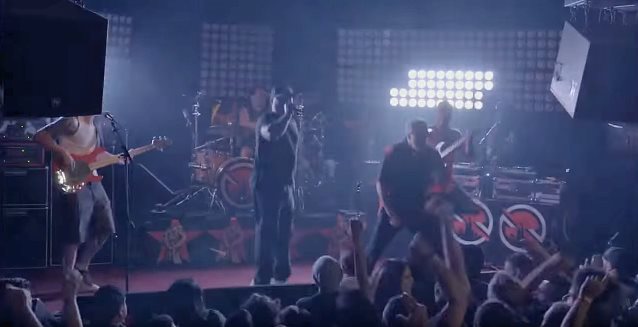 TOM MORELLO On PROPHETS OF RAGE's Formation: 'It's Bigger Than Us'

A two-minute video clip in which PROPHETS OF RAGE, the new supergroup combining members of RAGE AGAINST THE MACHINE, CYPRESS HILL and PUBLIC ENEMY, explain why they formed their new group during today's political climate can be seen below.

PROPHETS OF RAGE performed its first show on Tuesday night (May 31) at the Whisky A Go Go in West Hollywood, California. As promised, the outfit played 20-plus songs from all three of those acts, including RAGE's "Testify", "Sleep Now In The Fire" and "Bulls On Parade", PUBLIC ENEMY's "Prophets Of Rage", "Welcome To The Terrordome" and "Bring The Noise", and CYPRESS HILL's "Rock Superstar" and "Insane In The Brain".

The act also debuted two new songs, one of which was called "The Party's Over". The track was reportedly dedicated to Republican presidential nominee Donald Trump.

PROPHETS OF RAGE have also revealed that they will play a second Los Angeles date on Friday (June 3) at the Hollywood Palladium.

Guitarist Tom Morello told Radio.com on Tuesday (May 31) about the group, "Dangerous times do demand dangerous songs. This historical moment is really unprecedented. Both the country and the world are on the brink of the abyss. And we thought it was wholly irresponsible of us to be sitting on the sidelines . . . This is not just music, this is a movement."

Morello told Rolling Stone that the new outfit was "not a supergroup," adding, "We're an elite task force of revolutionary musicians determined to confront this mountain of election-year bullshit, and confront it head-on with Marshall stacks blazing."

There is no word yet on whether PROPHETS OF RAGE are working on a full album.