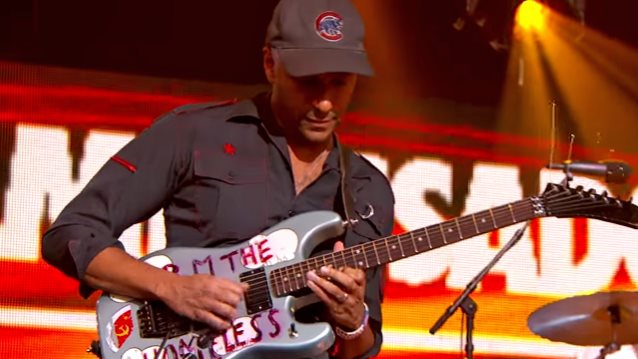 According to The Pulse Of Radio, RAGE AGAINST THE MACHINE and AUDIOSLAVE guitarist Tom Morello paid tribute to Cuba's former communist dictator Fidel Castro on Instagram after Castro died on Friday night (November 25) at the age of 90. Morello wrote: "While I don't agree with all that Fidel Castro did, there is ample reason why he is vilified in the U.S. and yet remains a huge hero throughout the Third World."

He continued: "By defying Yankee imperialism for 50 years, instituting the best health-care, child-immunization and literacy systems in the Western Hemisphere (surpassing the U.S. and Canada),exporting doctors to countries in need all over the globe (the Bush administration turned down his offer to send medical teams to New Orleans during Hurricane Katrina),and being an unrepentant advocate of the poor and exploited, it is no surprise that millions will mourn his passing."

Morello also recalled AUDIOSLAVE's visit to Cuba — the first time an American rock band performed in the Communist country — saying: "That experience will be one I will always treasure, especially the trip we took to a former country club of the wealthy that had been turned into a free college for gifted musicians."

Castro came to power in 1959 after leading a successful attempt to overthrow the corrupt government of Cuban president Fulgencio Batista. But he ruled Cuba for 47 years as a dictator, nationalizing all the country's businesses and banks and making the nation a repressive one-party socialist state.

While he was decorated with various international awards, instituted successful health-care, education and environmental programs, and battled imperialism globally, Castro was also condemned for human rights abuses, having political opponents killed, crushing dissent within his country and bringing Cuba to economic ruin.

Thousands of Cuban Americans in Florida celebrated his death over the weekend, with one woman telling CBS News: "We're celebrating the end of a man who separated so many families throughout the years, a man who killed many, who imprisoned many individuals just for thinking differently and not believing in his revolution, like my father, who was a political prisoner in Cuba."

Castro stepped down from power in 2008, passing the reigns to his brother Raul.