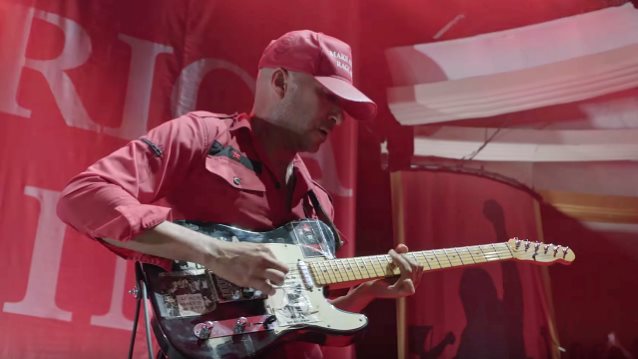 TOM MORELLO: 'The Fact That, In The Year 2017, We Have To Argue About Whether Science Is Real Is Pretty Idiotic'

Two Doods Reviews recently conducted an interview with RAGE AGAINST THE MACHINE and PROPHETS OF RAGE guitarist Tom Morello. You can now listen to the chat below.

Asked what he thinks is the number one threat to the U.S.A. right now, Tom said: "There are a myriad of threats, but I think an impending environmental disaster is one that we see on the news every day. And the fact that, in the year 2017, we have to argue about whether science is real is pretty idiotic. For the short-term gain of a few oil companies, they're willing to sacrifice the planet, and that is something that, frankly, we can't allow.

"But in anything, whether it's environmental disaster, whether it's economic inequality, whether it's racism and neo-fascism, those things don't change on their own," he continued. "The world is not gonna change itself; that's up to you. If we're gonna do anything, I would say, as a mantra, let's un-eff the world."

Morello also talked about how the U.S.A. should deal with the nuclear threat from North Korea. He said: "Well, frankly, North Korea is one of the problems that we, and the listeners, probably have less control over than some of the other ones, because that's another country. We've got enough problems in our country that I think that we should be addressing — from the disgusting economic inequality to an administration that is cozying up with some of the worst racist people around. So I think it's really important that people not leave their convictions behind in what it is that they do.

"We're musicians, first and foremost," he continued. "Our job is to make a record that kicks your ass, or job is to play a show that destroys the crowd. We don't leave our beliefs and our feelings behind in making those records and in playing those shows. And nor should you leave your convictions behind in whatever it is that you do."

Asked if he thinks there will be another civil war in the U.S.A. in the next decade, Morello said: "I do not anticipate that. There is a constant class war going on, of the rich against the poor, though, and that's been going on for a long time. And I think it's time that we fight back."