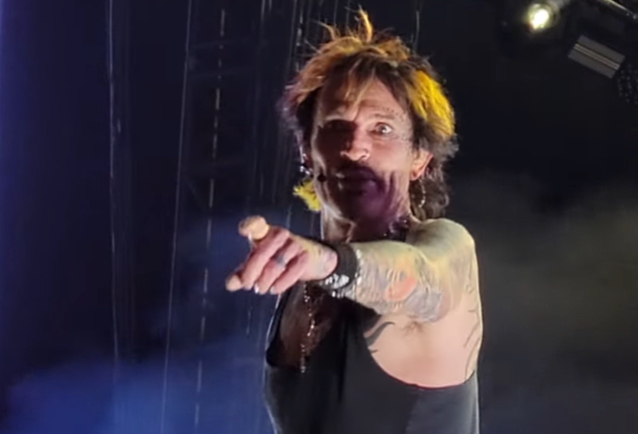 Tommy Lee has blasted a fan who criticized the MÖTLEY CRÜE drummer for encouraging audience members to expose their genitals on camera on the band's just-completed "The Stadium Tour".

Juan Alvarez, who attended CRÜE's concert with DEF LEPPARD, POISON and JOAN JETT & THE BLACKHEARTS on Wednesday (September 7) in San Francisco, told ABC7 Chicago that the incident was especially traumatizing for children who witnessed the naked body parts on the Jumbotron.

"Minors and everyone was forced to see people nude on the big screen and everyone was doing it around us too," he said. "It was like Sodom and Gomorrah, it was crazy. Even the usher, he had to pull a guy down from the brick wall because he had his private parts out, screaming. It was pretty crazy."

Alvarez, who plans to file a police report with San Francisco police for the indecent exposure, added that he is aware of CRÜE's past and knows that most CRÜE fans will brush off the nudity as a regular part of the band's performances.

"They thought it was absolutely fine and normal and hilarious and okay," Alvarez said. "When I brought up there were children and six- and nine-year-old girls and kids there, they said 'Well, they shouldn't have come to the CRÜE show.'"

According to ABC7, a San Francisco Giants spokesperson confirmed there had been several complaints and expressed concern to promoters.

On Sunday, Lee shared the ABC7 video report on Twitter and added an audio reaction to Alvarez's complaint. "Yo, Juan, I've got a question for you. What do you expect to see at a MÖTLEY CRÜE concert, dude? We've been doing this for fucking ever. Jesus Christ, you fucking pussy."

In the same tweet, Tommy wrote: "The world is too soft! Been doing this shit for years Juan! MÖTLEY CRÜE concerts aren't PG and never have been!!!! Grow the fuck up!"

Ever since the uproar over his full-frontal nude selfie which he posted on Instagram and Facebook in early August, Tommy has been encouraging the male members of the CRÜE audience to follow his lead.

In California, the crime of indecent exposure occurs when a person exposes his or her naked body or genitals in front of anyone who could be annoyed or offended by it. Penalties for indecent exposure vary. If you're convicted of felony indecent exposure, you must register as sex offenders for a minimum of ten years.

The world is too soft! Been doing this shit for years Juan! Mötley Crüe concerts aren’t PG and never have been!!!! Grow the fuck up! pic.twitter.com/3iqGqgqtae