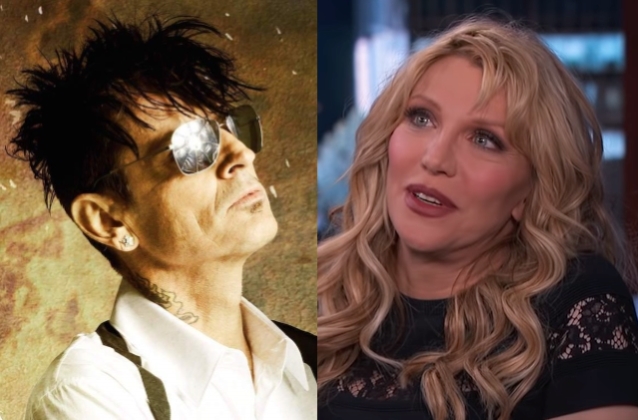 Tommy Lee has fired back at Courtney Love after the HOLE singer called the MÖTLEY CRÜE biopic "The Dirt" the "dumbest Netflix film ever."

In a new question-and-answer session with Interview magazine, Love was asked to name her favorite thing to do with her girlfriends. She responded: "I recently had three girlfriends over and we sat on my epic Majorelle art nouveau bed. My Rolfer came over to do his thing. We don't call it massage — they get so pissed off, the Rolfers do. He does deep tissue bodywork on ladies. We watched the dumbest Netflix film ever called 'The Dirt'. It's so stupid and vile about women, and just fucking dumb. It was super fun to groan together. We had jasmine tea. We all got our bodies worked on and watched this white rapper named Machine Gun Kelly, and we just made jokes. I was like, 'When's Ozzy gonna snort the ant?' Then, within seconds, he snorted the ant. Then the Nikki Sixx character was like, 'I have a new girlfriend. She's sweet. She's wonderful.' I was like, 'And her name is heroin.' Two seconds later: 'Her name is heroin.' I was killing it."

After news of Love's comments made the rounds, Lee took to Twitter to slam the musician and actress, writing: "Hey @Courtney When's your movie coming out? Oh wait.... Never!!!!!"

This is not the first time Tommy responded negatively to criticism of "The Dirt". Back in March, he blasted Esquire writer Madison Vain for suggesting that the film was "demeaning towards women," calling her a "little girl" whose opinion of the movie was "laughable."

"The Dirt" currently has a 39% critic score from 66 reviews on Rotten Tomatoes, the online review aggregation service that allows both critics and the public to rate movies. The same site has an 95% audience score for "The Dirt" from 6,334 reviews.

Vain was far from the only critic to pan "The Dirt". Indiewire called the film "wonderfully bad," saying that it "feels like it could have been made about any one of a zillion other bands." The Los Angeles Times called "The Dirt" "astoundingly tone deaf" and "as vapid and misogynistic as the band members and the book they wrote with author Neil Strauss."

The Daily Beast said that the film "spends almost two hours glamorizing shitty behavior, and then attempts to exonerate its stars with a few vague voiceovers about regret and rehabilitation." Other outlets that weighed in with negative reviews included the New York Times, The Atlantic and Deadline.

Some critics were kinder, describing "The Dirt" as a "guilty pleasure" and giving the actors who played the band credit for "working together to create such a chummy group that their power as an ensemble elevates the material. Just like their real-life counterparts."

"The Dirt" movie, which was helmed by "Jackass Presents: Bad Grandpa" director Jeff Tremaine, was picked up by Netflix after being previously developed at Focus Features and before that at Paramount.